Pic: Sinead O'Connor has been shafted out of money by her booking agent and she's venting her fury on Facebook

Sinead O'Connor is famous for her tirades against various powerful institutions, and one apparently unscrupulous booking agent seems to have made her naughty list.

END_OF_DOCUMENT_TOKEN_TO_BE_REPLACED

Somehow, however, only €500 of that money trickled down to her - the rest going to the band, the crew and the agents. Most egregiously, €11,700 went to her booking agent Rita Zappador and the booking company Modus in Rebus.

Over 23 times what O'Connor made.

O'Connor shared this document below alongside a vitriolic message which detailed the offences O'Connor has suffered. 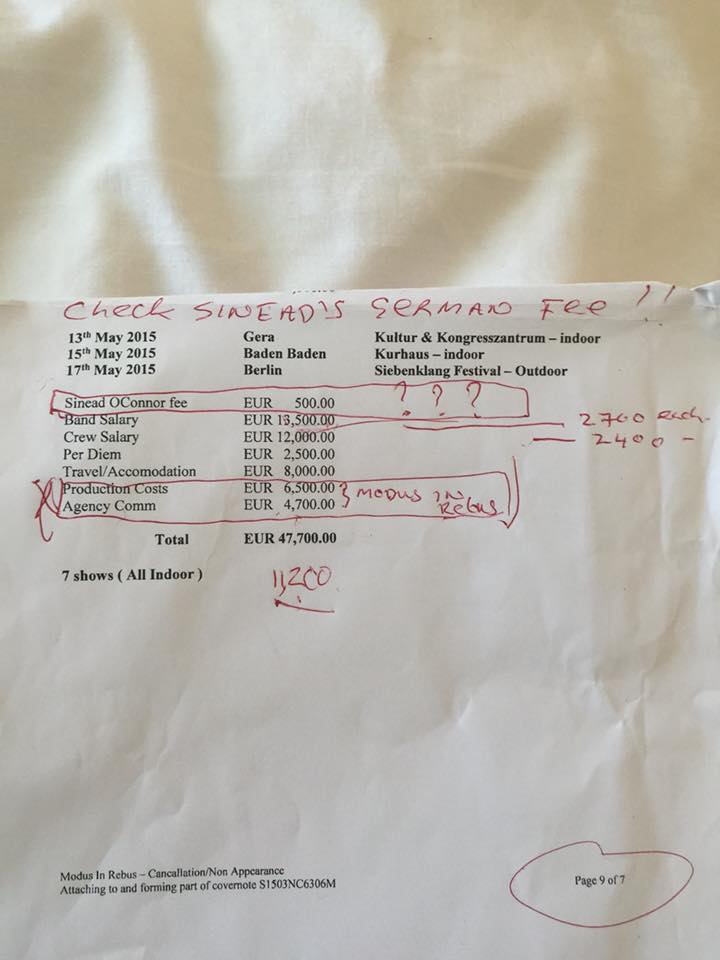 "MASSIVE negligence cases to be brought by me against every member of my now ex-management team. Not only for the below but for several even more appalling and reckless negligences, which have cost me hundreds of thousands of euro which I was illegally told was my obligation to pay, and it was NOT my legal obligation."

In addition to the paltry pay for three nights' work (compared to the huge sum earned by her booking agent), O'Connor claims that she was docked a further €4,000, meaning that she actually had to pay money to perform in Germany. She also states that she hasn't even been paid the €500. Her statement can be found in full here.

O'Connor ended her rant by stating her intention to sue all of the people involved, instructing them to "lawyer up" and get ready for "the fraud squad."

This is the second-most upset she has ever been.

House of Rugby Ireland · Quinn Roux on finding a home in Ireland and Mike McCarthy brings the absolute HEAT!
popular
The JOE Movie Quiz: Week 86
The 50 most iconic songs of all time* have been revealed
Majority of English people 'pleased' or 'not bothered' by prospect of united Ireland
PICS: The man with the biggest penis in the world has one unbelievable problem with it
The JOE Friday Pub Quiz: Week 227
Ireland adores Leitrim hurler Zak Moradi on Tommy Tiernan show
20 of the best comedies to watch on Netflix right now
You may also like
16 hours ago
JOE’s Song Of The Day #880 – Post-Party ‘Being Honest’
1 day ago
QUIZ: The JOE Music Quiz: Week 41
3 days ago
20 albums you won't believe turn 20 years old in 2021
1 week ago
JOE’s Song Of The Day #879 – Myth ‘Oh, La’
1 week ago
The JOE Music Quiz: Week 40
2 weeks ago
Dr Dre "doing great" after suffering brain aneurysm
Next Page