PIC: Somebody has updated the iconic 'You Are Now Entering Free Derry' mural

The iconic Free Derry Corner mural in the Bogside area of Derry has once again been updated, this time to include a quote by 1916 leader James Connolly.

The quote now stands beneath the phrase 'You Are Now Entering Free Derry', which has been printed on the free-standing gable wall since 1969 after it was first painted by John Casey. 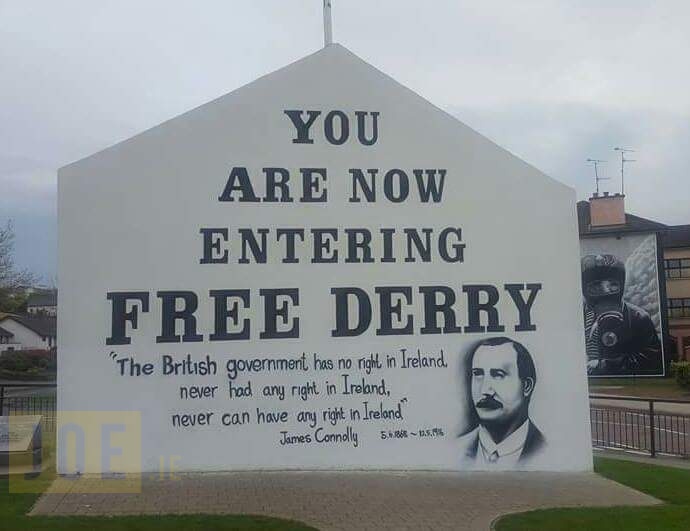 popular
Coleen Rooney 'confident she's won' Wagatha Christie trial against Rebekah Vardy, according to reports
Belgium becomes first nation to introduce compulsory monkeypox quarantine
QUIZ: If you get 15/15 in this General Knowledge quiz, give yourself a pat on the back
Met Éireann issue warning for potato blight this week
The JOE Movie Quiz: Week 155
Love Death + Robots might be the first show ever to feature too much nudity
Tory MP facing drink spiking claims as one fellow politician woke up to find 'nipples being licked'
You may also like
3 months ago
50 years since Bloody Sunday remembered in Derry
5 months ago
Card company issue apology following controversial Gerry Adams Christmas video
6 months ago
Apache Pizza launches biggest ever recruitment drive with 500 jobs in 180 stores
6 months ago
Mayor of Derry commemorates amazing roller-skating pint of Guinness feat
6 months ago
UCD Students' Union issues warning over "spiking" as nightclubs reopen
7 months ago
Derry ice-cream shop apologises for logo's "striking resemblance" to Parachute Regiment’s insignia
Next Page