Pic: This picture of a giant spider with its babies on an electricity meter is the stuff of nightmares

Arachnophobes beware, because this picture which was taken somewhere in Australia will haunt your dreams.

The image has since appeared on Reddit and it features a giant spider that's perched on an electricity meter clutching a sac containing lots and lots of baby spiders.

The terrifying sight is enough to put anyone off travelling to Australia. In fact, it's making us question the absolute need for electricity if we are honest.

Then again, that's one way of putting off the man who has to come and read your meter. 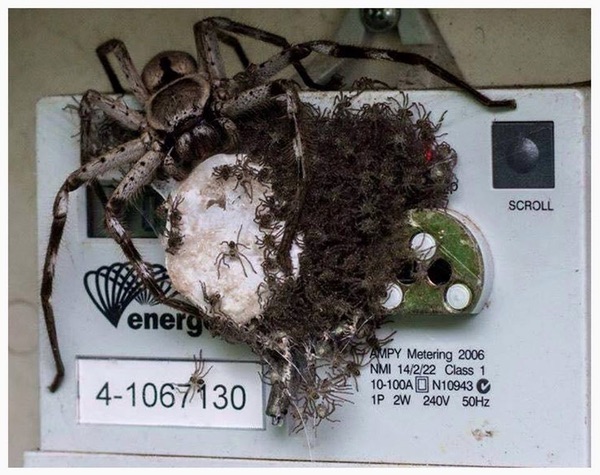 popular
People want "offensive" Crown Paints advert banned after attracting hundreds of complaints
Netflix has just added 23 very big movies to its library
Human remains found in suitcases are the bodies of two children
Disney+ has just added 10 big movies to its library
Robert Troy apologises and submits seven amendments to correct the record
Here's how to make €9-11 on Revolut in just a few minutes
QUIZ: Can you identify the famous song from the opening line?
You may also like
5 days ago
Salman Rushdie likely to lose an eye following stabbing in New York
6 days ago
Author Salman Rushdie reportedly stabbed on stage during event in New York
6 days ago
WATCH: Flight makes scary 'lowest ever landing' at Greek airport, narrowly avoiding plane spotters
6 days ago
Actress Anne Heche "not expected" to survive coma following car crash
1 week ago
Ryanair expects "zero disruptions" from strikes by Spanish cabin crew unions
1 week ago
Archie Battersbee dies aged 12 as life support is withdrawn
Next Page