The Irish people have spoken and Fianna Fáil have been welcomed back into an extremely strong position of power in the Dail, a vastly different scenario when compared to the red hot anger that was directed towards them in 2011.

We live in a democracy though and the Irish people have decided that the costly mistakes of Messrs Ahern, Cowen and co are a thing of the past and that Ireland's future shouldn't be entirely entrusted to Fine Gael. 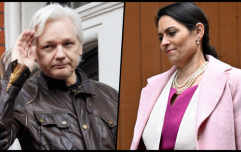 END_OF_DOCUMENT_TOKEN_TO_BE_REPLACED

While some of the election results are still to be announced, the makeup of the future government is still an issue that needs to settled and it's looking like Michael Martin's party will be even more prominent in Irish politics.

As mentioned before, people are entitled to vote for whomever they want but Mike McLoughlin certainly isn't welcoming Fianna Fáil back with open arms.

This post has gone viral around the world, mainly due to to the large amount of Irish emigrants sharing it, and it's one of the most scathing criticisms of Fianna Fáil's resurgence that you'll read.

popular
Jordan Peterson suspended from Twitter over Elliot Page comment, says he won't apologise
The JOE Friday Pub Quiz: Week 301
County where winning Lotto jackpot ticket worth over €5.5 million was sold confirmed
Parent's Benefit Leave in Ireland is being extended from today - here's what you need to know
The full list of cancelled flights in and out of Dublin Airport on Friday (so far)
One of the best sports movies of recent years is now available to stream at home
Netflix reveals full line-up of new shows and movies arriving in July
You may also like
4 weeks ago
Dáil hears it's cheaper for Irish people to see Bruce Springsteen in Rome than Dublin
1 month ago
Calls for scrapping of M50 tolls to ease cost of living burdens
1 month ago
Sue Gray provides partygate report to Boris Johnson
1 month ago
Powerful moment lawmaker gets emotional on Senate floor over Texas school shooting
1 month ago
First photos emerge of Boris Johnson drinking at Downing Street party during lockdown
1 month ago
Tory MP facing drink spiking claims as one fellow politician woke up to find 'nipples being licked'
Next Page