Make sure you take note of these.

Last month, Iarnród Éireann announced that it was making some major changes to its timetable along several routes — which would mainly affect commuters to and from Sligo, Rosslare, Maynooth, Phoenix Park and the Northern route.

The proposals were made last month and were subject to approval by the National Transport Authority. They will not come into effect as of 9 December. 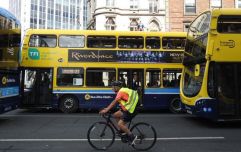 END_OF_DOCUMENT_TOKEN_TO_BE_REPLACED

Foremost among the changes is an increase in services between Drogheda/Maynooth and Dublin's Connolly station, as well as additional trains between Sligo and Connolly.

There are also major time changes for services to Rosslare from Connolly.

A full list of the changes can be found here.

popular
Beware of the very clever WhatsApp hack that is locking Irish users out of their accounts
The 50 most iconic songs of all time* have been revealed
Motor insurance costs set to fall from June after changes to payout guidelines
Making A Murderer: The explosive and NSFW telephone call that implicates a new killer
Reeling in the Years was watched by over half a million people last night
NIAC recommends AstraZeneca vaccine should only be given to people 60 and over in Ireland
Why John Corbett probably isn't Jo Davidson's mystery relative in Line of Duty
You may also like
1 year ago
Some Irish Rail services suspended in Dublin after vehicle damages barrier
1 year ago
Iarnród Éireann announce cancellation of several trains between Dublin and Kildare
1 year ago
DART to launch text alert system to address antisocial behaviour
1 year ago
Woman gives birth on an Iarnród Éireann train
1 year ago
Iarnród Éireann announce delays coming in and out of Connolly on Friday evening
2 years ago
Two Dublin train stations to close for further renovations this weekend
Next Page