Even those within his Republican party have taken issue with Trump's latest tweet rant, which found the President making personal remarks on a female TV personality.

Earlier today, Trump tweeted about the hosts of an NBC political show, Morning Joe, in which he referenced that they were not being supportive of his presidency, and ended up insulting the show's hosts Joe Scarborough and Mika Brzezinski.

We have included screen-grabs of the tweets below, as we have a funny feeling they may end up deleted from his account before long. 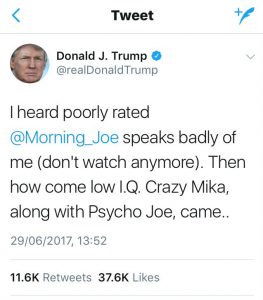 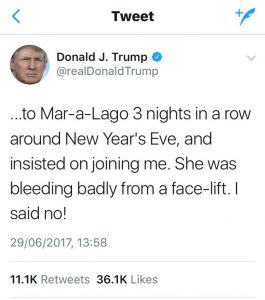 END_OF_DOCUMENT_TOKEN_TO_BE_REPLACED

According to USA Today, House Speaker Paul Ryan told reporters, "Obviously I don't see that as an appropriate comment... What we're trying to do around here is improve the tone, the civility of the debate. And this obviously doesn't help do that."

The reaction online was immediate and immense, and some of it even came from Trump's own party, with GOP lawmakers and senators voicing their disapproval of his personal remarks:

Mr. President, your tweet was beneath the office and represents what is wrong with American politics, not the greatness of America.

Please just stop. This isn't normal and it's beneath the dignity of your office.

On the President's tweets this morning → pic.twitter.com/tJJqsV8KCb

This is not okay. As a female in politics I am often criticized for my looks. We should be working to empower women. https://t.co/sV6WDE0EUD

popular
Amazon Prime Video has quietly added 10 big new movies to its library
One of the best Irish movies ever made has just been added to Netflix
The 50 most iconic songs of all time* have been revealed
8 great new additions to Amazon Prime Video in December
House of Gucci has the best sex scene from a big Hollywood movie in years
Clint Eastwood's final western is among the movies on TV tonight
QUIZ: Can you name all of these Succession characters?
You may also like
1 day ago
8 great new additions to Amazon Prime Video in December
1 day ago
"It has a Beauty & The Beast aspect" - Kristofer Hivju on his role in The Witcher Season 2
5 days ago
Marvel's answer to Die Hard and 7 more movies and shows to watch this week
5 days ago
Who tweeted it: Simu Liu or Rahul Kohli?
1 week ago
The 10 must-watch new (and old) arrivals on Disney+ this December
1 week ago
WATCH: The kids are all grown up in the first trailer for the new South Park movie
Next Page