Graeme and Steve are really flocking things up.

It's currently possible for some commuters in London to cheat the traffic cam at the Blackwall Tunnel in Poplar, East London and it's all down to the help of two mischievous seagulls.

Over the last few days, Graeme and Steve have been swooping in and repeatedly landing on top of a road camera in the English capital. 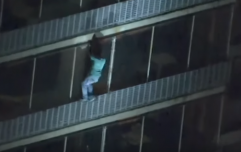 WATCH: Man scales down the side of a building as it catches fire

END_OF_DOCUMENT_TOKEN_TO_BE_REPLACED

They're clearly mocking (bird) the authorities here and if police ever get their hands on them, they're bound to be jail birds. Definite fowl play.

If the two lads ever need somebody to break them out of prison, Steven Seagull is the man to call.

We'll fly away forever after those puns.

The Transport for London's (TfL) Twitter feed has alerted Londoners to the deadly duo and after making their first appearance on Monday, they've since returned.

If you happen to be on these roads, beak careful out there and listen to this advice.

Advertisement
House of Rugby Ireland · Quinn Roux on finding a home in Ireland and Mike McCarthy brings the absolute HEAT!
popular
The JOE Movie Quiz: Week 85
QUIZ: The JOE Music Quiz: Week 41
Gardaí warn of scam targeting AIB customers
The 50 most iconic songs of all time* have been revealed
The JOE Friday Pub Quiz: Week 227
20 of the best comedies to watch on Netflix right now
Yewande Biala releases statement discussing racism on Love Island
You may also like
1 year ago
Apostrophe Protection Society closes down, claiming "laziness has won"
1 year ago
25 of the funniest tweets you might have missed in October
1 year ago
WATCH: RTÉ raised their game with their Halloween reporting on Thursday
1 year ago
Comedian Josh Pray to stop making Irish-themed videos following online abuse
1 year ago
Four Irish entries in Cosmopolitan's top 30 most swiped Tinder accounts in Ireland and the UK
1 year ago
WATCH: American comedian Josh Pray is back with his reaction to All-Ireland final
Next Page