“I think a lot of older people are now expressing the feeling that maybe life isn’t worth living any longer.”

A leading Irish physican and geriatrician has said that a lot of older people in Ireland are “expressing the feeling that maybe life isn’t worth living any longer” due to the impact of the Covid-19 pandemic on their day-to-day lives.

Speaking on Prime Time on RTE on Thursday night, Professor Ronan Collins, Consultant Physician in Geriatric and Stroke Medicine at Tallaght University Hospital, called for a broader discussion about how to live with the virus and “how we get on with our life” in Ireland.

END_OF_DOCUMENT_TOKEN_TO_BE_REPLACED

“I think we need to get on living in as far as is possible,” Collins said.

“Obviously it’s up to society to determine what’s an acceptable level of attrition with this illness.

“We have to accept the fact that me must live with this virus, it’s here for the foreseeable future, there isn’t a vaccine immediately on the horizon and so we must have this discussion as a society, and that includes all sectors of society, of how we get on with our life.”

Collins elaborated on his experience in dealing with older people in particular during the height of the Covid-19 pandemic, saying that the lack of consultation with older people when asking them to cocoon was a “mistake”.

"I think a lot of older people are now expressing the feeeling that maybe life isn't worth living any longer".

Professor Rónán Collins on @RTE_PrimeTime on the impact Covid 19 & the measures being taken to halt the virus are having on our societypic.twitter.com/Hjz6DFgBUR

Collins said that “a lot of morbidity” amongst older people arose as a result and that an absence of the likes of family celebrations and sporting and cultural events led to “a lot of older people are now expressing the feeling that maybe life isn’t worth living any longer”.

END_OF_DOCUMENT_TOKEN_TO_BE_REPLACED

“I had to look after older people during the height of the last wave of the crisis and a couple of things people have been saying to me, particularly a lot of older people, felt very distressed by the cocooning,” Collins added.

“And I think that, in hindsight, that it will be proven at least a mistake that we didn’t consult with older people a bit more. A lot of morbidity has arisen from that that we’re now dealing with.

“I think a lot of older people are now expressing the feeling that maybe life isn’t worth living any longer because there’s an equipoise now between their enjoyment of life, lack of family celebrations, community occasions, sporting and cultural events etc. etc.

“And so you can’t just assume that the only outcome from this pandemic here can be judged by what is the death rate, because society has other factors that it values.

“It values enjoyment of life, it values employment, it values our businesses and so we do need to have a broader discussion in society.” 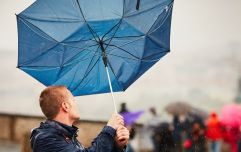 Status Yellow weather warning issued for all of Ireland

END_OF_DOCUMENT_TOKEN_TO_BE_REPLACED

Asked by Miriam O’Callaghan if he would open the pubs, Collins replied: “Absolutely.”

popular
The JOE Friday Pub Quiz: Week 220
The JOE Movie Quiz: Week 80
Harry Styles hits back at critics who told him to be more 'manly'
The JOE Music Quiz: Week 36
The 50 most iconic songs of all time* have been revealed
Here's Week 58 of JOE's 19 in 90 quickfire quiz
Here are the 6 best movies on TV tonight
You may also like
1 day ago
Six new Covid-19 deaths confirmed, 183 new cases
1 day ago
Gardaí renew appeal 20 years after disappearance of Sandra Collins
2 days ago
No corners were cut in vaccine process, says World Health Organisation
3 days ago
Over 300 Ford cars recalled in Ireland over battery issue that could lead to vehicle fire
3 days ago
Sale of luxury castle in Kerry, described as "one of Ireland’s best kept secrets”, completed for €4.5 million
5 days ago
Moderna vaccine trial shows 100% efficacy in dealing with severe Covid-19 infections
Next Page