Assistant to Mick McCarthy at Ipswich?

Roy Keane has tried to clarify some of the comments he made midweek about returning to club management.

END_OF_DOCUMENT_TOKEN_TO_BE_REPLACED

Speaking to the Irish Independent at the PFAI Awards Ceremony, Martin O'Neill's assistant said: "Our contract takes us up to the summer and a lot depends on what Martin wants to do."

“If Martin does want me to stay on, it would be hard to say no because I’m a loyal person. "I do want to get back in the ring and make the big calls. That could be two or four years away. And you get more money as the manager!" 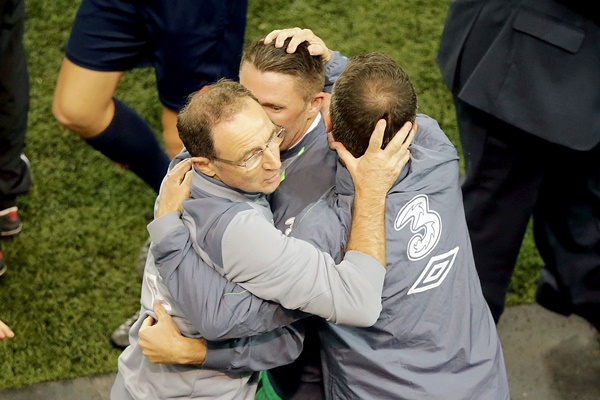 While this isn't the definite yes or no answer some would like to see, it's pretty clear that there's every chance MonKeano will still be together at the helm after next summer's Euros.

House of Rugby Ireland · Quinn Roux on finding a home in Ireland and Mike McCarthy brings the absolute HEAT!
popular
20 of the best comedies to watch on Netflix right now
The JOE Friday Pub Quiz: Week 227
The 50 most iconic songs of all time* have been revealed
The JOE Movie Quiz: Week 85
QUIZ: The JOE Music Quiz: Week 41
Yewande Biala releases statement discussing racism on Love Island
PICS: The man with the biggest penis in the world has one unbelievable problem with it
You may also like
1 week ago
A documentary about Pelé is coming to Netflix next month
3 weeks ago
UK records highest daily total of new Covid-19 cases
3 weeks ago
Everton v Man City tonight postponed due to coronavirus outbreak
3 weeks ago
Paul Merson rants about how Leeds fans should be furious at 'Bielsa ball'
1 month ago
EA Sports respond to 'baseless' lawsuit over alleged scripting in FIFA 21
1 month ago
Horrific F1 crash sees driver emerge unscathed with car engulfed in flames
Next Page