That's some outside the box thinking...

A Russian farm has given its dairy cows virtual reality headsets in a bid to reduce their anxiety.

The Moscow agriculture ministry, which announced the pilot project at a large dairy farm outside the capital, explained that research suggests that happy cows produce more milk. 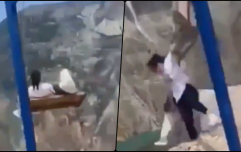 END_OF_DOCUMENT_TOKEN_TO_BE_REPLACED

The project subjected cattle to a simulated summer field with colors tuned for the animals' eyes, which is a more pleasing landscape for cattle over the winter months than a confined farm.

According to a statement from the ministry, the experiments took place at the RusMoloko farm in Moscow's Ramensky district.

“Virtual reality architects created a unique summer field simulation programme based on numerous studies showing that cows are better at perceiving shades of red than green and blue tones on the color spectrum,” the statement said.

Initial tests reveal it has reportedly boosted "the overall emotional mood of the herd".

Further and more comprehensive tests are expected to see if the changes boost or improve the quality of the milk produced.

There's no word on what kind of conditions the cows on this farm live in on a daily basis with Russia's winters being notoriously cold but summers are warm.

The Big Reviewski || JOE · The Big Reviewski with Y: The Last Man, that Malignant ending & a secret streaming service
popular
The five "best places to live" in Ireland have been revealed
The 50 most iconic songs of all time* have been revealed
The JOE Friday Pub Quiz: Week 261
One of the better Liam Neeson action romps is among the movies on TV tonight
PICS: The man with the biggest penis in the world has one unbelievable problem with it
Daniel Craig says goodbye to James Bond in emotional farewell speech
The Ultimate Dwayne "The Rock" Johnson Quiz
You may also like
3 months ago
Declassified Russian footage of the largest nuclear bomb ever tested goes viral
1 year ago
Wendell Pierce describes a pretty terrifying day on set in Russia for Jack Ryan Season 2
1 year ago
Cinemas around the country are showing Ireland v Russia game live on the big screen
2 years ago
Russia is remaking Chernobyl with the Americans as the bad guys
2 years ago
At least 41 killed in Russian plane after it burst into flames during emergency landing
2 years ago
At least 13 dead after fire breaks out on passenger plane
Next Page