Ryanair have announced plans to give their image a bit of a rejig after it was confirmed that they would be looking for a new director, who would also be their chief spokesperson, to help the public fall in love with the airline again.

According to The Independent, the company is hoping to find someone who will take charge of their advertising, promotions and communications strategy which will emphasise their "safety, customer service and low-fare message". 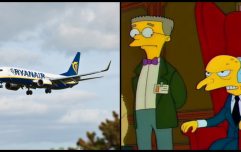 Ryanair's Michael O'Leary is looking for an executive assistant

END_OF_DOCUMENT_TOKEN_TO_BE_REPLACED

The reason for this change in tactic was hinted at by O'Leary at the company's AGM when he announced that profits are likely to fall below projections for this year, but the airline also received some bad publicity in recent weeks after Dublin-based surgeon Muhammad Taufiq al Sattar was charged €188 to change his flight to Birmingham after the death of his wife and three children in a house fire.

Ryanair refunded the doctor and wrote to him to apologise, but that didn't stop them being voted the worst brand in Britain by consumers in a poll by Which? magazine, all of which adds up to the fact that this may well be a mammoth task for whoever takes it on.

The loveable new image won't be a challenge to O'Leary however, as he stated that the company needed to stop unnecessarily aggravating customers, and added "I've always been a bit soft, just a little misunderstood".

Hat-tip to BBC News and The Independent.

popular
Amazon Prime Video has quietly added 18 big releases to its library
Large crowds gather outside Tullamore courthouse as man charged with murder of Ashling Murphy
Over 80% of people working from home could be missing out on €100 tax relief
WATCH: This foul-mouthed argument proves the Irish language is alive and well
Here's the line-up for this week's Late Late Show
A gripping '90s thriller is among the movies on TV tonight
60 jobs available on Stena Line with 50% of your time spent not working
You may also like
1 month ago
Crew on Ryanair flight to Dublin remove person after becoming "disruptive"
1 month ago
Stephen Donnelly defends new travel rules, calls Ryanair's comments "odd"
1 month ago
Ryanair condemns new Covid test rules for arrivals in Ireland as "gobbledygook"
1 month ago
Is comhartha é tvuít Ryanair faoi "comharthaíocht suáilce" don dearcadh atá ag an tír faoin teanga
1 month ago
Ryanair's "virtue signalling" claims are indicative of Ireland's view on the Irish language
1 month ago
Ryanair launches 'Buy One, Get One Free' flights sale in time for Black Friday
Next Page