The Church of Scientology is attempting to recruit Gaelgoirs in Canada.

Oddly enough this isn't the first time the controversial church has looked to recruit heavily amongst the Irish.

In August emails were sent to Irish staff working in universities across New York, Copenhagen and Denmark, with the email coming from the translations unit of the Church. 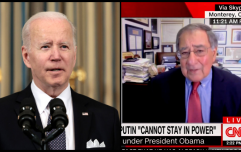 Biden misspoke because he is Irish, says former CIA director on CNN

END_OF_DOCUMENT_TOKEN_TO_BE_REPLACED

It indicated that they were in the midst of a huge translation project consisting of 5.5 million words.

They now seem to be expanding their attempts and they're reaching out to Irish teachers in Nova Scotia.

John Prendergast is currently working in Nova Scotia as part of the ICUF Irish Language program, he got the call to help out with translations and after doing a bit of research decided to go ahead.

Speaking to Irish Central John said that he didn’t believe the translation project was a bad thing and that we should have respect for as many beliefs and spiritualities as possible.

The Church of Scientology has one location in Ireland but it's not officially recognised as a religion here.

This article first appeared on Her.ie.

popular
Katherine Ryan says famous TV star is a ‘predator’ and everyone in industry knows
The 50 most iconic songs of all time* have been revealed
New plot details emerge for Christopher Nolan's upcoming epic Oppenheimer
The JOE Friday Pub Quiz: Week 322
Released 30 years ago today, this Irish thriller still has a worldwide impact
Kelsey Grammer reveals why David Hyde Pierce won't be back as Niles in Frasier reboot
David Walliams reportedly quits Britain's Got Talent after making offensive comments about contestants
You may also like
5 months ago
Irish man heading to Love Island villa as contestants are announced
8 months ago
QUIZ: How well do you remember your primary school Irish?
8 months ago
QUIZ: Can you name every Irish Oscar winner?
8 months ago
PERSONALITY TEST: What percent Irish are you?
1 year ago
Among Us gets an official Irish language translation
1 year ago
20 of the best Irish movies you can watch at home right now
Next Page