When it comes to Irish celebrities, it turns out that the men are a little more popular with the women — with Colin Farrell running away as the most searched for Irish star with 95,000 searches the world over. 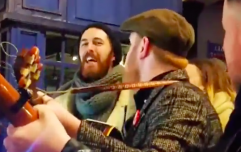 END_OF_DOCUMENT_TOKEN_TO_BE_REPLACED

In second place is Jamie Dornan, which shouldn't surprise anyone given that he starred in the psuedo-erotic blockbuster 50 Shades of Grey.

The bottom five was made up of Nadia Forde, Aidan Turner, Rosanna Davidson, Katie Taylor and Hozier.

popular
18 counties hit with weather warning as temperatures set to reach 29 degrees
Netflix has just added an incredibly tense 97-minute thriller
Nearly 100 flights delayed at Dublin Airport on Monday
Public urged to conserve water as around 60 areas at risk of supply shortages
QUIZ: Can you name all the counties in Ireland without the letter 'E'?
QUIZ: Can you get top marks in this short but tricky Irish geography quiz?
WhatsApp introduces way to choose who can and can't see you're online
You may also like
1 year ago
Hozier's 'Take Me to Church' is the only Irish track to make Spotify's "Billions Club" playlist
1 year ago
WATCH: Hozier tips popular busker playing ‘Take Me To Church’ on Grafton Street
2 years ago
Hozier performs 'The Parting Glass' in honour of Covid-19 victims
2 years ago
Dermot Kennedy, Hozier and Picture This among Irish Song of the Year nominees
2 years ago
Hozier adds second Dublin show due to demand
2 years ago
Hozier has announced a massive Dublin gig just in time for Christmas
Next Page