The motion is set to be debated next week.

Sinn Féin is tabling a motion of no-confidence in Tánaiste Leo Varadkar following the controversy surrounding his giving of an unpublished GP contract to a friend.

The motion is set to be debated in the Dáil next Tuesday. 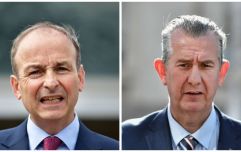 END_OF_DOCUMENT_TOKEN_TO_BE_REPLACED

Varadkar faced questions in the Dáil this week as opposition challenged him on the news which broke in the Village Magazine last weekend.

He apologised for his "errors of judgement" after sharing an agreement between the government and the Irish Medical Organisation to a rival union in April last year.

Varadkar said he had posted the agreement to National Association of General Practitioners' president Dr Maitiú Ó Tuathail to see if he could get the NAGP on side in the agreement.

A Sinn Féin spokesperson said: “Sinn Féin is tabling a motion of no confidence in the Tánaiste Leo Vardakar, which will be debated during our Private Members time on Tuesday.”

“We took the decision due to the seriousness of this situation and the fact that the Tánaiste has faced no sanction nor has he given a credible account for his actions in providing confidential information to a friend.

“This motion will allow the Dáil to say to the people that no one is above being held to account and that there are consequences when you act as Leo Vardakar has done.

“We will be setting out very clearly that doing favours or giving preferential treatment to a circle of insiders is unacceptable and cannot be tolerated."