So Rio Ferdinand is a huge Conor McGregor fan

Conor McGregor has deservedly received plenty of plaudits from within his own field in his brief UFC career to date and his impact hasn’t been lost on one of English football’s biggest names either.

Despite being hit with a serious knee injury that is set to sideline him for the next nine months or so, McGregor has remained overwhelmingly positive in all of his correspondence since and he looked in great form when meeting UFC legend Georges St. Pierre for a spot of lunch yesterday.

Had lunch with @GeorgesStPierre today!! Grateful the champ came down to give me some much needed words of advice!! pic.twitter.com/iR3xRY9h1P

END_OF_DOCUMENT_TOKEN_TO_BE_REPLACED

McGregor has earned a helluva lot of fans thanks to his instant impact in the UFC since an explosive knockout of Marcus Brimage in Sweden earlier this year and he can add Rio Ferdinand to his list of admirers after the Manchester United defender responded to McGregor’s tweet with the following post this morning.

We need @TheNotoriousMMA on the bill for the uk #UFC event!! This guy is the real deal

@rioferdy5 Thank you for the support Rio! Im just post ACL surgery. I will be back April/May 2014!! See you in Manchester though, no doubt!! 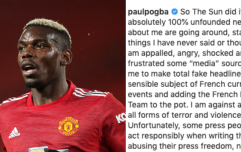 END_OF_DOCUMENT_TOKEN_TO_BE_REPLACED

We’re not sure if Rio was aware of McGregor’s current circumstances but Conor soon filled him in and he might end bumping into his new biggest fan at the UFC event in Manchester at the end of next month, an event McGregor had planned to participate in before his injury.

Unfortunately, Rio and all McGregor fans will have to wait a little bit longer before he's back in the Octagon but if his recent comments and attitude are anything to go by he'll be back and better than ever next year.

popular
Jeffrey Dahmer’s dad thinks he knows what’s to blame for son becoming a serial killer
Two new 24-hour bus services are coming to Dublin
QUIZ: Test your knowledge with this Ultimate Friends Character Quiz
House Of The Dragon is already better than Game Of Thrones
Power-ranking the House of the Dragon characters after THAT big fire
WATCH: HBO's The Last Of Us trailer is finally here and it is brilliant
People think they've figured out the ranking of the viewers on your Instagram Stories
You may also like
4 months ago
BBC trainee accidentally posts message mocking Man United live on TV
1 year ago
COMPETITION: WIN a copy of Eric Cantona's new Manchester United documentary, The United Way, on DVD
1 year ago
Manchester United documentary written by Eric Cantona available to watch at home in Ireland this May
1 year ago
The JOE Pub Quiz: Week 214
2 years ago
Twitter delete their own tweet after Manchester United complaint
2 years ago
Jesse Lingard: Everything I eat on a match day
Next Page