Animal rights organisation PETA (People for the Ethical Treatment of Animals) has claimed that two cities in the United States have refused permission to display a PETA advert close to the parade routes in the run-up to St. Patrick’s Day.

PETA claims that the advert, which features a shirtless man with a four-leaf clover in his mouth alongside the words ‘Kiss Me, I’m Vegan. Go Vegan and Get Really Lucky This St. Patrick’s Day’ was deemed too “sexually suggestive” in Butte, Montana and Savannah, Georgia. 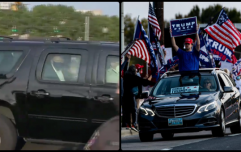 END_OF_DOCUMENT_TOKEN_TO_BE_REPLACED

In a statement, PETA said that the ad was deemed too “sexually suggestive” to be placed near the parade routes in both cities, while transit companies in Butte never responded to inquiries about displaying it in bus shelters around the city.

“With their healthy hearts, sizzling physiques, and increased stamina, vegans easily score that pot of gold at the end of the bedroom rainbow,” said PETA President Ingrid Newkirk.

“PETA’s St. Patrick’s Day signs may be sexy, but they send a wholesome message that nothing is more attractive than compassion.”

Having been rejected in Butte and Savannah, the adverts will instead be displayed on the parade route in Manchester, New Hampshire, which also has a high proportion of residents of Irish descent, from 5 March onwards.

The Big Reviewski || JOE · Colm Meaney & his Pixie co-stars on deadly gangster priests, Irish accents & pickled onion crisps
popular
The JOE Friday Pub Quiz: Week 220
Harry Styles hits back at critics who told him to be more 'manly'
The JOE Movie Quiz: Week 80
Status Yellow snow warning issued for five counties
Here are the 6 best movies on TV tonight
Facebook to remove false claims about Covid-19 vaccine
Here's the lineup for this week's Late Late Show
You may also like
2 weeks ago
QUIZ: Can you name all the US States that contain 8 letters?
3 weeks ago
QUIZ: Can you name all the US states with a smaller population than Ireland?
1 month ago
QUIZ: Can you identify these US cities on a map?
2 months ago
America the loser as Trump and Biden slug out pitiful draw
2 months ago
"Will you shut up, man!" - Trump and Biden scolded as first presidential debate turns ugly
3 months ago
Trump's former chief strategist Steve Bannon charged with fraud over Mexico wall bid
Next Page