Stop everything! Chicken covered in chocolate is a thing and it's available

Chicken and chocolate may be unlikely bedfellows, but not in the US.

A new restaurant has opened in Los Angeles called ChocoChicken and although it has only been open for a week now it is already doing a roaring trade. I know you are dying to find out how it's made, so here it is: The free-range chicken isn't fried in chocolate oil. It's lightly coated with a special cooking chocolate made from bittersweet cocoa, and fries up a shade of chocolate brown. 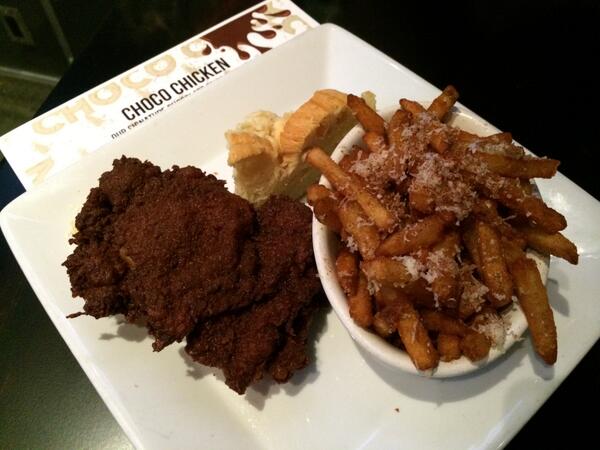 END_OF_DOCUMENT_TOKEN_TO_BE_REPLACED

Excited? That's not all. Side dishes include White Chocolate Mashed Potatoes and Duck Fat Fries sprinkled with chocolate seasoning. Just when you thought chicken couldn't be any more finger licking good. We're not sure if it should be called Chickolate or Chocken, but no doubt, we'll be seeing one of these shops open up some day in Ireland if it continues to be as successful as its first week seems to suggest.

To think some people laughed at Scotland and their deep-fried Mars Bar ways......

popular
County where winning Lotto jackpot ticket worth over €5.5 million was sold confirmed
QUIZ: Can you get 100% in JOE's great big halfway through 2022 quiz?
Jordan Peterson suspended from Twitter over Elliot Page comment, says he won't apologise
The JOE Friday Pub Quiz: Week 301
The full list of cancelled flights in and out of Dublin Airport on Friday (so far)
Parent's Benefit Leave in Ireland is being extended from today - here's what you need to know
QUIZ: Can you name all the counties in Ireland without the letter 'A'?
You may also like
2 days ago
Airline to launch world-first economy bunk beds for long-haul flights
4 days ago
Kendrick Lamar closes Glastonbury with blood-soaked plea for women's rights
6 days ago
Oslo Pride events cancelled after two killed in Norway shooting
1 week ago
Right to abortion overturned by US Supreme Court after nearly 50 years
1 week ago
Boris Johnson says he will 'keep going' after historic by-election defeats
1 week ago
WATCH: J.K Rowling tricked by Russians impersonating Zelensky on Zoom call
Next Page