Super Blood Wolf Moon appears in the sky over Ireland

Stargazers in parts of Ireland who were lucky enough to be under clear skies have been treated to the astronomical spectacle of a "super blood wolf moon", although you probably had to brave some freezing temperatures to do it.

The rare celestial event takes places when the moon is positioned slightly closer to the Earth than normal, and appears slightly bigger and brighter than normal, which is known as a super moon. During the total eclipse, the moon was expected to give off a coppery red glow on the lunar surface as it slips into Earth’s shadow, known as a blood moon. 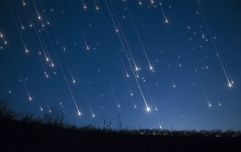 END_OF_DOCUMENT_TOKEN_TO_BE_REPLACED

"During a total lunar eclipse, white sunlight hitting the atmosphere on the sides of the Earth gets absorbed and then radiated out (scattered). Blue-colored light is most affected," NASA officials wrote online.

"That is, the atmosphere filters out (scatters away) most of the blue-colored light. What’s left over is the orange- and red-colored light."

Since this appears in January, when wolves used to howl in hunger outside villages, it earned the name wolf moon, according to The Farmers Almanac, making it a super blood wolf moon.

It's expected to be the last blood moon for over two years, meaning astronomers were particularly interested in it, so while it was cloudy in some areas of Ireland, others got a good view of the spectacle. 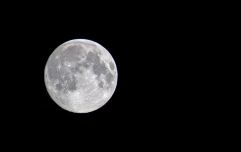 NASA confirms the presence of water on the moon

END_OF_DOCUMENT_TOKEN_TO_BE_REPLACED

"We're going into this unusual lull in total lunar eclipses over the next couple of years," said Tom Kerss, an astronomer from the Royal Observatory Greenwich.

"So this is a really good one to catch as it's going to be a long time before you catch another one like this - we will have other lunar eclipses, we just won't have anything quite as spectacular until May 2021."

popular
Waterford man sentenced to three months imprisonment for operating "cruel and illegal" puppy farm
Netflix has just added 33 very big movies to its library
The full list of cancelled flights in and out of Dublin Airport on Monday (so far)
One of the coolest movies of recent years is now available to watch at home
QUIZ: Can you guess the crisps from the pixelated packet?
QUIZ: It's time for one of our trickiest General Knowledge Quizzes yet
Dublin Airport denies making 1,000 people redundant during the pandemic
You may also like
1 month ago
One of the longest lunar eclipses of the decade will be visible in Ireland tonight
1 year ago
The JOE Movie Quiz: Week 76
3 years ago
China are launching an "artificial moon" that will be brighter than the real one
3 years ago
There's a Hunter's Moon this month, here's what you need to know about it
3 years ago
Here are the best places and times in Ireland to see the rare blood moon
4 years ago
There will be an extremely rare Super Blue Blood Moon in the sky this week
Next Page