Having to play second fiddle to the teams that have overtaken them in the Premier League must be tough for Manchester United to take, but their Twitter account is really stretching it in their attempt to claim an edge over Premier League leaders Chelsea before their meeting at Old Trafford on Sunday.

It seems fairly obvious that their most recent tweet is designed to plug the Manchester United account on Google+ but trumping the fact that Louis van Gaal has twice as many Google searches as Jose Mourinho is really clutching at straws.

Van Gaal or Mourinho? Who's the most searched-for manager this season? Our latest #GoogleTrend has the answer. pic.twitter.com/2Aa9HcDIvW

The tweet didn’t raise the possibility that the fact that LVG has twice as many Google searches might have negative as well as positive connotations, but as you might expect, some of the responses to the tweet were withering to say the least. 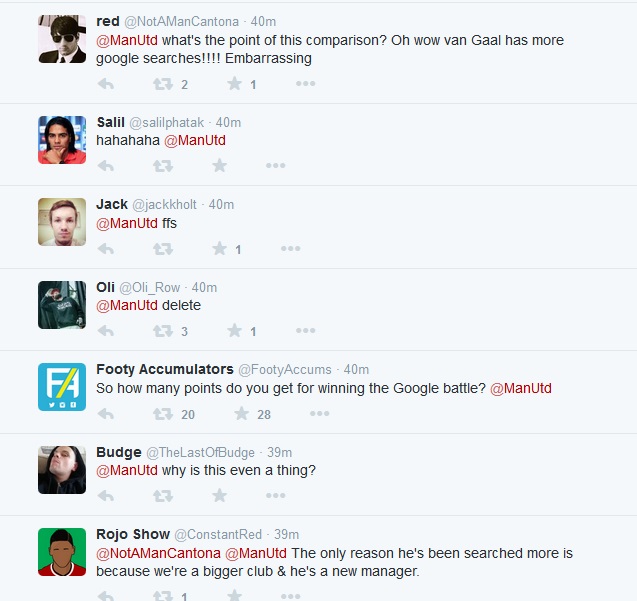 popular
Amazon Prime Video has just added 21 big movies to its library
The 50 most iconic songs of all time* have been revealed
One of the best crime thrillers ever is among the movies on TV tonight
Here is a list of every Bank Holiday in Ireland in 2023
Nicola Bulley's phone found by the river 'could be a decoy', diving expert suggests
Mark Hamill on the one piece of dialogue he got removed from the original Star Wars
Teenager killed in shark attack after swimming with dolphins in Australia
You may also like
8 months ago
BBC trainee accidentally posts message mocking Man United live on TV
1 year ago
COMPETITION: WIN a copy of Eric Cantona's new Manchester United documentary, The United Way, on DVD
1 year ago
Manchester United documentary written by Eric Cantona available to watch at home in Ireland this May
2 years ago
The JOE Pub Quiz: Week 214
2 years ago
Harry Maguire gives his version of events in Mykonos in TV interview
1 week ago
James May condemns Jeremy Clarkson for 'creepy' Meghan Markle column
Next Page