The Eurovision posted a video to their YouTube channel today explaining the big changes they are making to the voting system (which, for many of us, is the far more entertaining part of the night).

Up until now, votes by the country's jury panel and the country's public have been presented as one - with each accounting for 50% of a country's overall points awarded (from 1-8 points, 10 points and, of course, douze points). 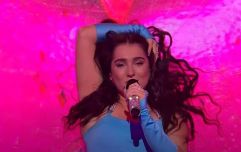 Ireland has not qualified for the Eurovision Song Contest Grand Final

END_OF_DOCUMENT_TOKEN_TO_BE_REPLACED

This year, the two will be separated, with all total public votes from the 43 countries combined and revealed after the jury vote - building far more tension and suspense, making the winner unclear until the very end of the show.

This way we still get the fun of going to correspondents in each country, with the really important votes being withheld until the very end. Individual breakdowns of the public vote will be accessible on eurovision.tv afterwards.

This handy video explains it all.

Doing this could also remove the prospect of the dreaded nul points, as public biases towards neighbouring countries won't outweigh the jury's vote now that the two are counted separately.

popular
People want "offensive" Crown Paints advert banned after attracting hundreds of complaints
Netflix has just added 23 very big movies to its library
Human remains found in suitcases are the bodies of two children
Disney+ has just added 10 big movies to its library
Here's how to make €9-11 on Revolut in just a few minutes
QUIZ: Can you identify the famous song from the opening line?
The prequel to one of the best twists of all time and 7 more movies & shows to watch this weekend
You may also like
2 months ago
UK lined up as host for Eurovision 2023 after organisers rule out Ukraine hosting
3 months ago
QUIZ: How well do you remember Ireland's Eurovision entries?
3 months ago
The six Eurovision countries with "irregular voting patterns" have been revealed
3 months ago
Where will 2023's Eurovision be held if Ukraine can't host?
3 months ago
Eurovision producers reveal "irregular voting patterns" during Saturday night's final
3 months ago
The JOE Friday Pub Quiz: Week 294
Next Page