The early months of 2015 will be remembered for Ireland's historic struggle for marriage equality and a huge sea-change in Ireland's reputation as a country dogged by dogmatic, archaic values.

It seems that the next battle is nearing the horizon, as the Repeal The 8th movement builds momentum in the search for abortion rights for women in Ireland. 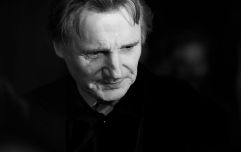 END_OF_DOCUMENT_TOKEN_TO_BE_REPLACED

Creator of Father Ted, Graham Linehan and his wife Helen, who is also a writer, spoke to The Guardian today about their heart-breaking choice to terminate a foetus that would have had no chance of survival.

Under Ireland's current laws, Helen Linehan would have faced up to 14 years in prison had she obtained an illegal abortion on Irish soil.

Oscar-winner Liam Neeson has also lent his voice to the cause (literally), by narrating this haunting campaign video which critiques Ireland's constitution.

Certain Irish TDs have claimed that there is not the 'appetite' for a referendum on this extremely divisive issue, but as more and more influential voices add their decibels to the growing demand for change.

The Big Reviewski || JOE · The Big Reviewski with Andy Serkis, Squid Game follow-ups & the return of Succession
popular
Nigel Farage has been saying republican phrases again, but in reality, he's the one laughing
How to lower your cholesterol - 5 really handy tips
Largest aircraft in the world touches down at Shannon Airport
Facebook looks set to change its name as part of rebrand
Skeletal remains of six people found under Cork pub
An underrated Denzel Washington thriller is among the movies on TV tonight
The 100 greatest TV shows of the 21st century have been revealed
You may also like
6 days ago
Here's the line-up for this week's episode of The Late Late Show
1 week ago
QUIZ: Michael Collins – the film – is 25 years old but how well do you know it?
1 month ago
One of the better Liam Neeson action romps is among the movies on TV tonight
8 months ago
Family Guy creator in talks to reboot The Naked Gun with Liam Neeson
9 months ago
Liam Neeson says he is retiring from action films
10 months ago
Liam Neeson to narrate landmark two-part series marking the 175th anniversary of the Great Famine
Next Page