Michael Cohen has been sentenced to 36 months in prison.

One of American President Donald Trump's former lawyers has been sentenced to three years in jail following a sentencing in a Manhattan court on Wednesday.

According to The Guardian, Cohen was sentenced for his role in a hush-money scandal which saw him buy the silence of two women who said they had affairs with Trump.

President Trump, whose presidency is said to be at risk following this incident, denied knowing about the payments at first, but he has since insisted that the payments were "a simple private transaction", and not election-related spending.

Since Mr. Cohen came under investigation, Mr. Trump has mocked him as a “weak person” who was giving information to prosecutors in an effort to obtain leniency when he is sentenced. 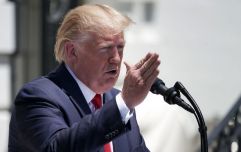 Trump says WHO "called it wrong" on coronavirus

END_OF_DOCUMENT_TOKEN_TO_BE_REPLACED

In August 2018, Cohen pleaded guilty to eight charges, including one related to the scandal, and he stated under oath that he paid Daniels "in coordination with and at the direction of a candidate for federal office," referring to Trump himself.

Cohen’s sentence is the longest to arise out of the Mueller probe thus far.


popular
Tesco make changes to their delivery system to favour elderly and in need customers
Here's Week 27 of JOE's 19 in 90 quickfire quiz
Someone in Ireland is €311,413 richer after Wednesday's Lotto draw
QUIZ: Can you name all of these characters from Love/Hate?
Gardaí set up checkpoints on major roads across the country to stop Easter travel
Google announces Stadia Pro is now available free for two months
Trump says WHO "called it wrong" on coronavirus
You may also like
1 week ago
US extends Covid-19 guidelines until 30 April
1 week ago
The US now has the most coronavirus cases in the world, ahead of China and Italy
2 weeks ago
Trump wants the US "open for business" amid coronavirus pandemic
3 weeks ago
Donald Trump: Coronavirus outbreak could last until July or August
3 weeks ago
Ireland added to United States travel ban
3 weeks ago
Donald Trump has declared a state of national emergency over coronavirus
Next Page