Tweet of the Day: Can you guess which football coach has spent the most money over the past 10 years?

Familiar names, but where do they rank?

We prefer the slow and careful Arsene Wenger approach, whereby we carefully develop and nurture young talent because it's more satisfying seeing a player rise from the academy level to the first team, rather than winning any league or the Champions League title. 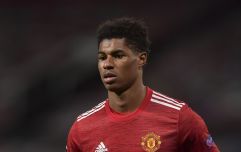 END_OF_DOCUMENT_TOKEN_TO_BE_REPLACED

Nah, only kidding, we obviously like to make massive bajillion gilllion Gareth Bale/ James Rodriguez-type signings that are so huge that they dwarf the GDP of most countries. It drives the club's accountants nuts and usually gets us fired very quickly.

This picture proves the harsh truth that exists in the very elite levels of European football; money is the biggest driving factor behind success. In just over 5 years of management Guardiola has spent just above €390m, the Glazers actually did back Ferguson and Van Gaal, while Wenger seems to be a bit looser with the purse strings.

This list of some of the spending by Europe's top coaches' in the last 10 years is very interesting.

House of Rugby Ireland · Quinn Roux on finding a home in Ireland and Mike McCarthy brings the absolute HEAT!
popular
Holly Willoughby criticises influencer for travelling to Dubai during pandemic
QUIZ: Can you name all of these countries just from one of their cities?
Status Yellow rain warning issued for 12 counties
Here are the best movies on TV tonight
New Zealand set to close its borders for the entirety of 2021
Leo Varadkar says if Ireland introduced mandatory hotel quarantine, it would have to do so for a year
Five things we definitely do not want to see in the new Harry Potter TV series
You may also like
3 months ago
Paul Pogba releases powerful statement in response to 'fake news' from The Sun
3 months ago
The JOE Pub Quiz: Week 214
4 months ago
Harry Maguire gives his version of events in Mykonos in TV interview
5 months ago
Twitter delete their own tweet after Manchester United complaint
5 months ago
Jesse Lingard: Everything I eat on a match day
11 months ago
Jurgen Klopp sends brilliant letter to 10-year-old Manchester United fan from Donegal asking him to stop winning
Next Page