TWEETS: A passionate debate between TDs Ruth Coppinger and Jack Chambers had the public gripped

If you were watching RTÉ this afternoon then the chances are that you were privy to a very passionate debate between the recently elected TDs from the Dublin West constituency, Fianna Fáil TD Jack Chambers and Ruth Coppinger of AAA-PBP.

Chambers is the first Fianna Fáil representative in the area since the sad passing of Brian Lenihan in June 2011 while Coppinger was previously a schoolteacher and a member of the Association of Secondary Teachers in Ireland before becoming a Councillor for the Socialist Party on Fingal County Council and now AAA-PBP. 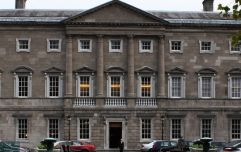 END_OF_DOCUMENT_TOKEN_TO_BE_REPLACED

The duo have locked horns in the last few weeks in a bid for votes in their constituency but the debate on RTE was of a very different nature.

You may remember Chambers' recent appearance on Tonight with Vincent Browne where he argued that the Irish public shouldn't have a say in any decision to repeal the Constitution's eighth amendment. That footage is below, and another heated debate took place on RTÉ this afternoon between the two TDs.

Here's how the Irish public felt about this discussion on Repeal the Eighth.

YOU'RE IN THE WRONG COUNTRY THEN MATE!!#GE16

Good to hear @RuthCoppingerTD and @campaignforkate speaking about #repealthe8th being an important issue for next Dail. #rte

Thought I was watching Reeling in The Years but it was just Jack Chambers's haircut and ideals. #GE16

Fair play to @RuthCoppingerTD for giving Jack Chambers both barrels over the #repealthe8th . For a young man, he sounds like a party stooge

Delighted to hear @RuthCoppingerTD stating that women aren't going to put up with Jack Chambers and those who hold his views! #repealthe8th

Jack Chambers, I'm in tears here. "Representing the youth of Ireland" yet looking and sounding like Reeling in the Years. Classic. #GE16

popular
Jordan Peterson suspended from Twitter over Elliot Page comment, says he won't apologise
The JOE Friday Pub Quiz: Week 301
County where winning Lotto jackpot ticket worth over €5.5 million was sold confirmed
Electric Ireland announces second major price hike in recent months
Parent's Benefit Leave in Ireland is being extended from today - here's what you need to know
One of the best sports movies of recent years is now available to stream at home
Netflix reveals full line-up of new shows and movies arriving in July
You may also like
6 years ago
WATCH: The Healy-Rae brothers having a singsong celebration outside Leinster House
6 years ago
VIDEO: Fake Trailer for 'The Coalition' is a hilarious send up of Irish politics
6 years ago
PIC: This notice on a door in Ireland was the most shared tweet of the General Election
6 years ago
PIC: Handsome Donegal politician misses out on election but ends up snagging himself a date instead
6 years ago
PIC: The Healy-Rae-Bans are the accessory everyone will be wearing this spring
6 years ago
VIDEO: The cavalcade of cars on the Healy-Rae victory tour in Kerry was something else
Next Page