The slagging is underway.

Former Ireland and Munster legend Paul O’Connell was conferred with an honorary doctorate by the University of Limerick today.

The 36-year-old is currently recovering from the hamstring injury he suffered against France at the World Cup which is going to keep him out of action for anything from four-to-eight months.

Hopefully we'll see him in action with Toulon sooner rather than later and today's conferring should have cheered him up a little bit. 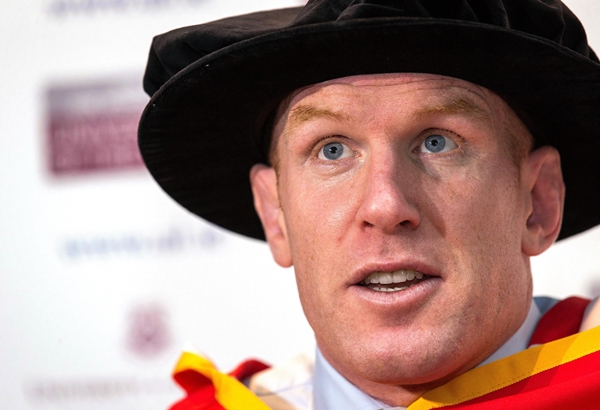 Dr. Paul O'Connell's former teammates did take too long before taking the mickey out of the Limerick man's new title.

popular
QUIZ: Can you name every county in Ireland containing the letter 'O'?
The JOE Friday Pub Quiz: Week 295
Morgan Freeman has been banned from entering Russia
Three people injured after two-car crash in Dublin
An exciting Predator prequel and 6 more big trailers you might have missed this week
An '80s action classic is among the movies on TV tonight
Late Late Viewers left in awe of Paul McGrath's memories of Jack Charlton
You may also like
2 months ago
Every Guinness fan needs to try these brand new experimental beers
3 months ago
"Samaritans saved my life" - Brent Pope praised for honest interview on Tommy Tiernan Show
6 months ago
QUIZ: How well do you know these famous Ireland players?
1 year ago
Four Irish players propelled into Lions debate after England hiding
1 year ago
Craig Casey and Johnny Sexton combination backed for Italy clash
1 year ago
Defence grows for Billy Burns after one of the roughest days of his rugby career
Next Page