Iarnród Éireann has reminded the public that two of Dublin's busiest DART stations are set to close this weekend.

Pearse Station and its neighbouring Tara Street Station are set to close on 13 and 14 April, as roof works will commence at Pearse Street.

END_OF_DOCUMENT_TOKEN_TO_BE_REPLACED

The renovations will have knock-on effects for several commuters. The DART will be suspended between Connolly & Grand Canal Dock, meaning that DARTS will only operate between Howth/Malahide and Connolly; and between Grand Canal Dock and Greystones.

Similarly, there will be bus transfers in place between Connolly & Bray for the Dublin/Rosslare train. 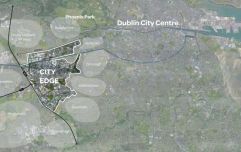 END_OF_DOCUMENT_TOKEN_TO_BE_REPLACED

The roof above Pearse Station has stood since the 19th century. A statement from Iarnród Éireann explains: "The roof structure, which dates from the 1880s, is in poor condition, and protective mesh netting has been in place in the station below roof level in recent years to protect customers and rail services, due to the corrosion which has occurred.

"Its replacement has been identified by Iarnród Éireann as a crucial safety project."

This weekend will be the third weekend of renovations above Pearse St. The station also had to close on 23/24 February, and 9 March. The next closures are scheduled for 29 and 30 June.

popular
The JOE Friday Pub Quiz: Week 308
Infant dies after being hit by jeep in Roscommon
Netflix has just added 23 very big movies to its library
Pilots fly over destination airport at 37,000 feet because they were both sleeping
Two Irish people arrested in "smuggling event" near Miami
One of 2022’s best hidden-gem comedy series is available to stream
Multiple fatalities after planes collide mid-air over California airport
You may also like
1 week ago
The 10 must-watch events at the 2022 Dublin Fringe Festival
1 week ago
Don't miss this temporary pop-up night club, coming to Dublin for one night only!
1 week ago
Man charged in connection with death of Sean McCarthy in Dublin
1 week ago
Man in his 20s in critical condition following assault at public transport stop in Dublin
1 week ago
Murder investigation launched after discovery of man's body in Dublin apartment
1 week ago
Man arrested following discovery of a body in apartment in Dublin
Next Page