The club said they were initially "unaware" of the photo...

Belfast rugby club, Malone RFC, has launched an investigation after two of their players posted "an inappropriate photograph" on social media.

The photo shows two men, one of whom is in his underwear, holding a trophy between their crotches.

Public warned about another sophisticated phone scam doing the rounds

END_OF_DOCUMENT_TOKEN_TO_BE_REPLACED

The pair have name badges 'Paddy Jackson' and 'Stuart Olding' stuck to their chests.

Jackson and Olding were both acquitted of rape last month.

Malone RFC players were celebrating their victory in the McCrea Cup at the Kingspan Stadium on Easter Monday when the photo was taken. 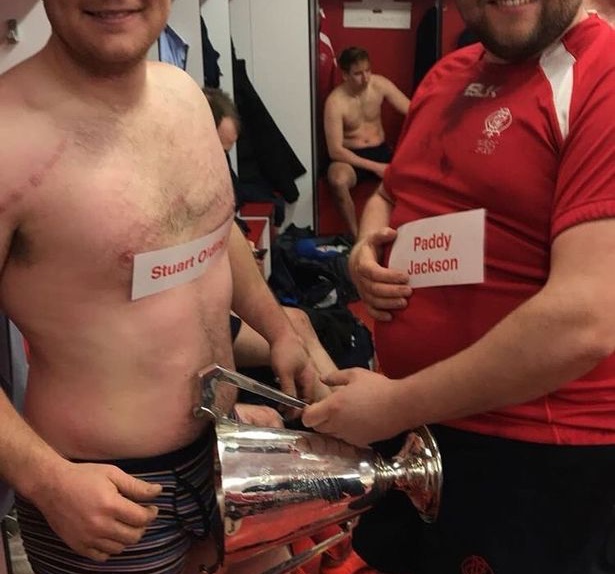 The club's statement said: "It has been brought to our attention that an inappropriate photograph involving Malone players has been posted on a private social media site.

"Malone was unaware of the photograph and will investigate how it occurred.

"The Club apologises for any offence caused by the contents of the photograph.

"A full investigation will now take place by Malone RFC."

popular
Public warned about another sophisticated phone scam doing the rounds
Garda union hits out at "absolute confusion" over outdoor drinking and dining
QUIZ: Name all the counties of Ireland that contain 3 vowels or more
The Queen appealing for volunteers to weed the garden of her Sandringham Estate
Gardaí will use "discretion" over outdoor drinking at pubs and restaurants
The Lisdoonvarna matchmaking festival has been cancelled for a second year
QUIZ: Can you name all these European countries from a list of cities?
You may also like
5 hours ago
Gardaí will use "discretion" over outdoor drinking at pubs and restaurants
6 hours ago
Man in his 60s killed following assault at home
20 hours ago
Gardaí have said people can't drink alcohol in newly set up outdoor seating in front of bars
21 hours ago
Unvaccinated people will be able to travel abroad this summer with Covid cert, says Leo Varadkar
23 hours ago
Leo Varadkar defends calling for a united Ireland during Fine Gael Ard Fheis speech
1 day ago
288 new cases of Covid-19 reported across Ireland
Next Page