The Royal National Lifeboat Institute (RNLI) have released a stunning video of multiple rescues off the Wicklow coast on Wednesday.

The clip shows a crew-member swimming to rescue a woman who had been swept into cave near Silver Strand beach, one mile south of Wicklow Head. After returning the woman to shore the RNLI was called out once again to air rescue two people and bring them to hospital with the help of the Coast Guard helicopter. The duo had injured themselves on the rocks trying to return to the beach.

If that wasn't enough heroics for one day, they assisted a fourth person in difficulty near the Strand. 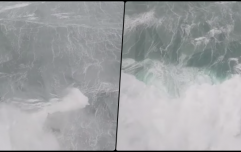 END_OF_DOCUMENT_TOKEN_TO_BE_REPLACED

We greatly admire the bravery of the RNLI here at JOE and when you consider that many members of the lifeboat crew are volunteers, we think their dedication is nothing short of remarkable.

Hats off to them… If you want to donate to the RNLI make sure to head over here.

popular
Lidl to launch its second 'reverse vending machine' in Ireland next week
Husband of school teacher killed in Texas shooting dies of heart attack
The 2 Johnnies share unbelievable catfish ordeal affecting over 40 people
Two excellent crime thrillers are among the movies on TV tonight
Amber Heard "distraught" as court hears explicit Johnny Depp text message
Acclaimed actor Ray Liotta has died, aged 67
QUIZ: How well do you know these famous flights in movies and shows?
You may also like
7 months ago
Kayaker rescued off Cork coast after being spotted in trouble by golfers
8 months ago
Four people rescued in Donegal after boat runs aground in "very foggy" conditions
9 months ago
Man rescued from sea off Wicklow coast after falling overboard
9 months ago
Four people rescued as yacht sinks off the Wexford coast
1 year ago
Dun Laoghaire lifeboat services rescue seven people in two separate incidents
4 years ago
You're going to want to watch this documentary airing on BBC next week
Next Page