Video: Those Royal Guards don't take kindly to being touched while on duty

A tourist got a little too much action on his recent excursions to see the Royal Guards at Windsor Castle.

While mimicking the guard, walking up and down the tourist then went a step too far and placed his hand on the guard's shoulder. 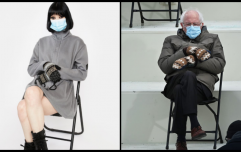 END_OF_DOCUMENT_TOKEN_TO_BE_REPLACED

This provoked a very hostile response. The guard drew his bayonet and shouted at the man to "step back from the Queen's guard."

The UK's Ministry for Defence said this was the correct response from the guard in the circumstances he faced.

Speaking to The Mirror, a spokesperson said, "Since that incident, a rope has now been installed at that sentry position that keeps tourists away and stops people approaching the guard...

“It is disappointing that a member of the public has shown such disrespect towards the Queen's Guard. The soldier is there to protect the Queen, himself and the sentry position. He reacts appropriately.”

The Big Reviewski || JOE · The Big Reviewski with Dune, a mini-Hangover reunion & the best of Timothée Chalamet
popular
WhatsApp to stop working on 53 phone models, including iPhone 6
Waterford driver fined for speeding, immediately speeds away, is fined again
Three Status Yellow warnings issued as rain set to hammer the country
FREE NOW reports "200 requests a minute" on Sunday following nightclubs reopening
Urgent appeal launched for blood donations as supplies "extremely low"
Paschal Donohoe confronted on the street by anti-vaccine protestors
Nightlife sector asks for two-week grace period on implementing guidelines
You may also like
4 days ago
Priest blesses local nightclub in the most Donegal thing imaginable
6 days ago
Make "No Bones" about it - this dog has taken over TikTok
3 weeks ago
"Only in Dublin" - Viral clip sees three men remove sofa from window with sweeping brushes
1 month ago
Garth Brooks might be returning to Ireland, and people have a lot to say about it
1 month ago
Kids pull "Bart Simpson" style prank on school board in brilliant viral clip
1 month ago
Ten of the best memes as James Corden dressed as a rat stops traffic for flashmob in LA
Next Page