A novel approach to drugs smuggling. Still didn't work, though.

A man has been arrested in Spain after trying to conceal more than 100g of cocaine in a ham and cheese toasted sandwich.

Spanish police stopped the man from boarding a flight to Benidorm and then posted the following photos on their official Twitter page, with nice pouches of coke sitting atop the melted cheese.

That'd give it quite the kick, we'd say. He should probably just go with the mustard next time. 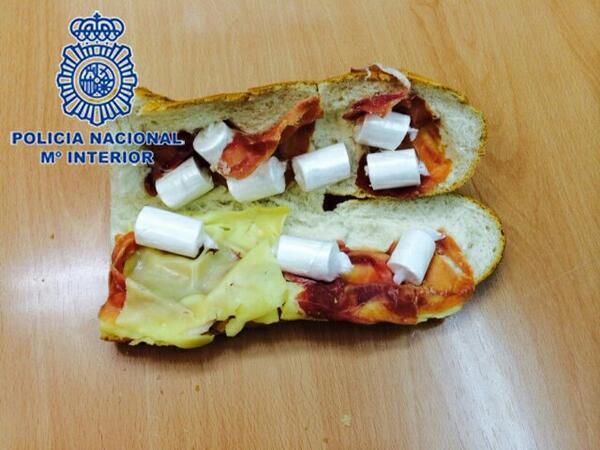 Cheers to the girls at Her.ie for this.

The Big Reviewski || JOE · The Big Reviewski with Andy Serkis, Squid Game follow-ups & the return of Succession
popular
Ryanair is seeking applicants for "the worst job in Ireland"
The JOE Friday Pub Quiz: Week 265
QUIZ: Can you master this General Knowledge Quiz?
National Lottery reveals 28 locations where tickets worth over €35,000 each were sold
Warning after person has bank account cleared out hours after scam text
NEW JOBS ALERT! If you're looking for a new career, this opportunity could be perfect for you...
PICS: The man with the biggest penis in the world has one unbelievable problem with it
You may also like
23 hours ago
Bill Clinton rushed to hospital with blood infection
23 hours ago
Norway bow-and-arrow attacker handed over to health services
1 day ago
Sydney is getting rid of hotel quarantine for tourists
1 day ago
Robert Durst of The Jinx sentenced to life in prison for murder
1 day ago
Jonah Hill asks fans to stop making comments about his body
2 days ago
Several people killed during bow and arrow attack in Norway
Next Page