WATCH: First teaser trailer for creepy new show from the people behind The Haunting of Hill House

It's set to hit Netflix in September.

The mind behind one of Netflix’s most creepy shows is back with a new series in the form of Midnight Mass.

The new seven-episode series from Mick Flanagan, the creator of The Haunting of Hill House and follow-up show, The Haunting of Bly Manor, looks likely to be just as frightening as Flanagan's other two programmes on the streaming platform. 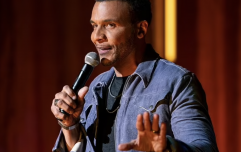 Comedian and Netflix star David A. Arnold has died, aged 54

END_OF_DOCUMENT_TOKEN_TO_BE_REPLACED

The new show also has some great names signed on to star in the form of Rahul Kohli, Zach Gilford, and Hamish Linklater, to name just a few.

The basic premise from Netflix describes the series as "the tale of a small, isolated island community whose existing divisions are amplified by the return of a disgraced young man (Zach Gilford) and the arrival of a charismatic priest (Hamish Linklater).

"When Father Paul’s appearance on Crockett Island coincides with unexplained and seemingly miraculous events, a renewed religious fervor takes hold of the community: but do these miracles come at a price?"

If you're craving a new horror series to binge then the good news is, you won't have to wait too long as it's set to hit the streaming service on 24 September.

You can take a look at the first teaser trailer here: