John Barnes has once again spoken passionately about recent comments made by Liam Neeson, where the actor stated that he wanted to kill a "black bastard", following an incident a number of years ago.

Speaking on BBC Question Time on Thursday night, Barnes said he "absolutely" stood by his recent defence of Neeson's comments. 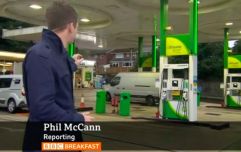 END_OF_DOCUMENT_TOKEN_TO_BE_REPLACED

Barnes once again stated that the problem was not with what Neeson said, but with society as a whole and how racism and discrimination stems from our upbringing, and that's what the conversation needs to be about.

"Why I have to give him credit is because as much as we all want to say we view people as equal, we don’t, and we have to admit it," Barnes said.

"Because we are influenced by our environment and the environment that he came from, albeit from a Catholic and Protestant point of view, is; whoever the enemy is we have to kill the enemy.

"The enemy at that particular time happened to be black. But it equally could have been English and he’d have wanted to have killed any English man. So, those holier than thou would say how terrible it is, [that] it's a disgrace. What is the truth about the way we all feel about people from different races, different religions? We all discriminate and we have to admit it.

"And not only do we have to admit it. Why I’m happy to say that I discriminate unconsciously is because the environment I was brought up in shows me that and continues to show me that. You read the newspapers every day and you hear about Muslim terrorists and Nigerian gangs and that gives you a negative impression of not just terrorists and of con men or gangs, but also of Nigerians and Muslims. This is the influence that society has on us.

"We can’t help the way we’ve been brought up and unless we’re going to be able to have the conversation rather than as soon as we mention anything say, ‘You’re racist and you discriminate but we don’t’, but that’s not the reality.

"Because if I was to ask you now, if you had a choice of who you’d have to live next to, between a - well, I don’t know where you’re from - between anybody, a muslim and a white. You would have an opinion based on how you’ve been brought up. But we won’t admit it because we’re afraid of being called racist."

‘We won’t admit it, because we are afraid of being called racist’@officialbarnesy says people need to have open and honest conversations about unconscious discrimination and racism. #bbcqt pic.twitter.com/g7NXueMJ41

The Big Reviewski || JOE · The Big Reviewski with Andy Serkis, Squid Game follow-ups & the return of Succession
popular
Brian Laundrie: 'Strong probability' remains found belong to missing fiance
QUIZ: Can you name all the countries beginning with L?
Here's the lineup for this week's Late Late Show
WATCH: Micheál Martin and Danny Healy-Rae had an almighty row in the Dáil
How to lower your cholesterol - 5 really handy tips
Socially distanced queues at bar counters expected to be allowed under new guidelines
The cast of Succession on the most ridiculously expensive scene in the show
You may also like
1 day ago
The 100 greatest TV shows of the 21st century have been revealed
3 months ago
A BBC documentary on the Peru Two is coming next month
3 months ago
Mrs Brown's Boys chat show cancelled this year due to Covid
4 months ago
BBC journalist shouted at and chased by anti-lockdown protesters
4 months ago
Holby City cancelled by BBC after 23 years
5 months ago
Martin Compston responds to fan disappointment with Line of Duty finale
Next Page