The world's longest pedestrian suspension bridge has been unveiled at the Arouca Geopark in Portugal. It runs for a total of 516 metres between two mountains and hangs 175 metres, or 1,692 feet, above the region's fast-flowing River Paiva.

As you can see in The Guardian's video tour below, it truly is an impressive feat of engineering and perhaps most static images don't do it justice. As such, a swathe of people from the town of Arouca gathered for the official opening ceremony on Sunday to take the first steps across the bridge. 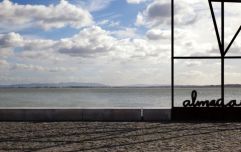 An Irish man has died while holidaying in Portugal

END_OF_DOCUMENT_TOKEN_TO_BE_REPLACED

Hugo Xavier was the first person to take make the inaugural journey across the new world's longest pedestrian suspension bridge, which now surpasses the Charles Kuonen Bridge in the municipality of Randa, located among the Swiss Alps, which measures at 494 metres and has held the record since 2017.

Xavier said that, at first, “I was a little afraid, but it was so worth it,” and described the crossing as "extraordinary, a unique experience" and "an adrenaline rush".

Fellow vertigo-sufferer, Rui Brandao, recommended not looking down when crossing.

We can see what Rui means...

The bridge is now being referred to as, simply, '516 Arouca' and will no doubt attract tourists from all around the world when international travel fully resumes. Arouca’s mayor, Margarida Belem, told AFPTV that the bridge would be a “fundamental attraction”.

A local tour guide went on to describe the additions as "a breath of fresh air for our land because it will attract more investment, more people” and "will bring a new dynamic to Arouca".

The Big Reviewski || JOE · Mortal Kombat director Simon McQuoid and new Sub-Zero star Joe Taslim on fatalities and fight scenes
popular
The JOE Friday Pub Quiz: Week 242
Kate O'Connell lays into Fine Gael in explosive Claire Byrne interview
COMPETITION: Win a star-gazing camping adventure to the stunning Aran Islands for you and your housemate
The 50 most iconic songs of all time* have been revealed
"I'm not apologising to anybody." Eoghan Harris calls banned anonymous Twitter account "benign"
Here are the best movies on TV this evening
"Giant" piece of Chinese rocket set to hit Earth this weekend
You may also like
2 years ago
Department of Foreign Affairs release important travel information for anyone holidaying in Portugal
2 years ago
Irish DJ shares remarkable footage of the sky over Albufeira as devastating wildfire spreads
2 years ago
The Simpsons 'prediction' for the World Cup final remains very much on course
3 years ago
Strike action may result in dozens of Ryanair flights being cancelled over Easter week
3 years ago
Over 100 passengers left stranded when the plane's co-pilot was found drunk
3 years ago
This city has just won Best European Destination Award for the 10th time in the last 11 years
Next Page