Yet again, Met Éireann has predicted snow will fall in parts of Ireland this week

This time of the year will always see the same battle being waged in most Irish households.

We're talking about the eternal struggle between you and the thermostat. "I'm not turning on the heating yet, I'll give it another week," is what some people say to themselves. However, it appears that the battle is now lost.

Yep, as is the norm at this time of year, with winter approaching, conditions are getting nippier. Much like its recent prediction that snow is set to fall in certain parts of Ireland, Met Éireann has reiterated that the mercury is set to drop and that snowfall is likely on Wednesday and Saturday.

As for Tuesday, it's set to be a clear morning with frost in places.

Sadly, rain in Ulster will spread southwards over much of Leinster, turning more showery too. Conditions are expected to be brighter in the south and west though, with sunny spells and scattered showers of rain or hail.

Scattered showers are expected tonight and it's set to be a cold one with frost developing as temperatures fall to between -1 and + 2 degrees.

The cold conditions will continue into Wednesday with patchy rain expected in many areas during the morning. The rain will get heavier in the west and spread eastwards, turning to sleet in places. There's a risk of thunder in Connacht and Munster, while much of Ulster and north Leinster will stay mainly dry until evening.

Snow is being forecasted for areas of higher altitude on Wednesday night. It's expected to be cold, breezy and mostly cloudy, with outbreaks of rain which will turn increasingly wintry over much of Leinster and Munster with snow on hills and mountains. 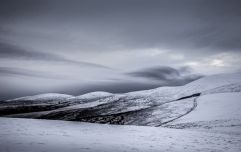 END_OF_DOCUMENT_TOKEN_TO_BE_REPLACED

The rain and sleet will clear southwards overnight with frost and icy patches developing. Lowest temperatures, meanwhile, will be between -1 and +2 degrees.

Thursday will be cold, dry and bright in most areas with good sunshine. However, there'll be some showers on east and north coasts. The night is set to be cold with frost in many inland areas and some coastal showers.

The same conditions are expected for Friday, but there'll be a few showers in the northwest and southeast too. Frost is expected to form on Friday night.

Saturday will start off dry and bright. However, rain will develop in the west during the morning and then spread across the country through the afternoon and evening.

On Saturday night, rain and sleet will continue, with snow developing on higher ground, but these conditions will gradually clear overnight. Sunday is set to be cold and dry with sunny spells and with frost developing at night.