If you're looking for something engaging, entertaining, and clever, then this new podcast will be right up your street.

Unfiltered with James O'Brien is premiering on Tuesday, October 3, and will see some of the biggest figures from sport, politics, music, entertainment and popular culture appearing in JOE's purpose-built studio in London.

Featuring on the first podcast will comedian, actor and radio host Russell Brand and future episodes will have the likes of Alastair Campbell, and Piers Morgan as guests in a series of in-depth interviews.

Each episode will be filmed and hosted in full on JOE's YouTube page and will be made available on all good podcasting apps and sites.

Another day, another show @JOE_co_uk. @campbellclaret being interviewed by @mrjamesob for new podcast series #Unfiltered pic.twitter.com/6iAFVxNYLb 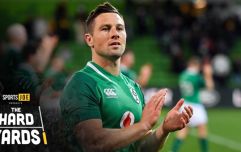 END_OF_DOCUMENT_TOKEN_TO_BE_REPLACED

Speaking about the launch, JOE’s Head of Content, Evan Fanning said, “James is quite simply the standout interviewer in Britain today. It’s hard to think of anyone in recent years who has even come close to developing a style as arresting and commanding as his.

"Whatever the subject matter, James has a special ability to cut through the bullshit and get to the real truth of the situation, and that is what makes Unfiltered such an exciting series. We’ve been working on the concept for the show with him over the summer months and we think it’s going to be something really special.”

Unfiltered with James O'Brien is out on Tuesday, October 3. Don't miss it.

Subscribed to our new podcast Unfiltered yet? Get on it! First ep: @mrjamesob speaks to @rustyrockets - out Tuesday https://t.co/rBo9JhYSlq

popular
Fish and chips could be removed from Irish menus over rising fuel costs
Netflix has just added 33 very big movies to its library
Increase in passenger charges at Dublin Airport may be on the way
The full list of cancelled flights in and out of Dublin Airport on Monday (so far)
The long-awaited MetroLink is finally happening, for real this time, honest
Jordan Peterson suspended from Twitter over Elliot Page comment, says he won't apologise
Government considering giving public €200 again to assist with rising energy costs
You may also like
1 month ago
The 2 Johnnies say over 100 people have contacted them about the GAA catfish
1 month ago
The 2 Johnnies set to update fans on catfish situation soon
1 month ago
The 2 Johnnies share unbelievable catfish ordeal affecting over 40 people
10 months ago
Joe Rogan tests positive for Covid-19 after telling listeners not to get vaccine
1 year ago
EXCLUSIVE: Listen to Paul Mescal's song ahead of release of new Irish crime podcast series
1 year ago
JOE's new podcast series will be giving weekly breakdowns of The Fast & Furious Saga
Next Page