Boris Johnson says there's "no better outcome" than his deal

It's a huge day in UK politics.

But then again, there have been many big days in UK politics since the referendum on EU membership was held in 2016.

Saturday will mark another day when a British Prime Minister tries to get a withdrawal agreement through the House of Commons as Boris Johnson battles for votes to do what Theresa May could not.

Johnson has urged MPs on all sides of the house to support his deal stating that it gets Britain out of the EU and is the best outcome available to the UK.

Speaking to ITV News, Johnson said: "It busts out of [the] backstop, the previous problem with the deal, the previous deal that kept us locked in the customs union and the single market so, it's a vast, vast, vast step forward."

Boris Johnson tells @Peston the nation will 'heave great sigh of relief' if a Brexit deal passes through parliamenthttps://t.co/tKvuTd2qoK pic.twitter.com/8QPT9OyMGa

Speaking to the BBC's political editor Laura Kuenssberg, Johnson outlined that he was hopeful the deal would pass through Commons on Saturday. 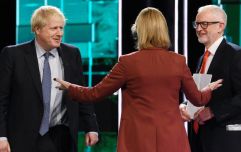 END_OF_DOCUMENT_TOKEN_TO_BE_REPLACED

"I just kind of invite everybody to imagine what it could be like [Saturday] evening, if we have settled this, and we have respected the will of the people, because we will then have a chance to to move on.

"I hope that people will think well, you know, what's the balance, what do our constituents really want?

"Do they want us to keep going with this argument, do they want more division and delay? Look, you know, this has been a long exhausting and quite divisive business Brexit."

Johnson reiterated his commitment to leaving the UK at the end of October, saying "there's no better outcome than the one I'm advocating tomorrow."