We have entered "live-update" territory.

As of 14 November 2018, Sky News, the BBC, the Guardian and RTÉ are all running round-the-clock, live-update coverage of Brexit like it was a manhunt for the escaped perpetrator of some kind of atrocity, like a mass shooting or a terrorist attack.

And at this point: That's just about fair enough.

END_OF_DOCUMENT_TOKEN_TO_BE_REPLACED

But it's important to note that we've seen this before. It seems every few months the negotiators will approach something that sounds like a deal, try to put a leash on the rabid dog that is Brexit and sooner or later we're all covered in bite marks and foaming at the mouth.

That's because Brexit does not refer to a step-by-step plan. It doesn't refer to a specific set of policies. Brexit is a cult. A blind faith in an impossible future that would make the Seventh Day Adventists jealous.

And it is not just the incumbent Tory government who is to blame. In Ireland, Fine Gael can't raise its left hand without Fianna Fáil making a fist, and those guys are supposed to be in government together. Somehow, in the UK, Labour has expended virtually no energy on actually communicating to the public what is at risk if Brexit, as it exists in November 2018, is not brought before the British public for a second time.

Boris Johnson yesterday argued that there is a better deal available to the UK — conveniently ignoring that he himself was Foreign Secretary for over two years since Brexit and failed to advance or even articulate this deal in any, way, shape or form.

We still have time to go for something better - a SuperCanada free trade deal that will allow the UK to benefit from brexit and actually respect the referendum. The future can be bright if only we change course now 2/2

END_OF_DOCUMENT_TOKEN_TO_BE_REPLACED

The sad reality is that there is no Brexit deal that will be good for the United Kingdom. There is no dispute that the UK had far more going for it as part of the European Union. Britain's fate as a country worse off was sealed once it voted to leave the EU.

Vote Leave's entire campaign was premised on totally false notions that the UK would be able to "control its borders" and that there would be "£350 million a week" immediately redirected towards the NHS. The break-up process was touted as the "easiest deal in history" by Liam Fox, the then-Secretary for International Trade in 2017.

END_OF_DOCUMENT_TOKEN_TO_BE_REPLACED

Throughout the campaign, there was nary a mention of Northern Ireland, the Good Friday Agreement or a hard border. All far too real.

And now, those who trusted career liars like Johnson and Farage simply cannot believe their eyes. The British public were tricked into believing that leaving the EU would be as simple as, say, colonising and wiping out an indigenous population in the 18th Century. Who knew independence could be so tricky?!

Of course, this was the argument that those on the Remain side had so desperately tried to impress upon the public — only to be dismissed as "Project Fear". By folks like Michael Gove who said that the country was "tired of experts", as if it's more comforting for a movement to be led by men who proudly have no idea what they're doing. 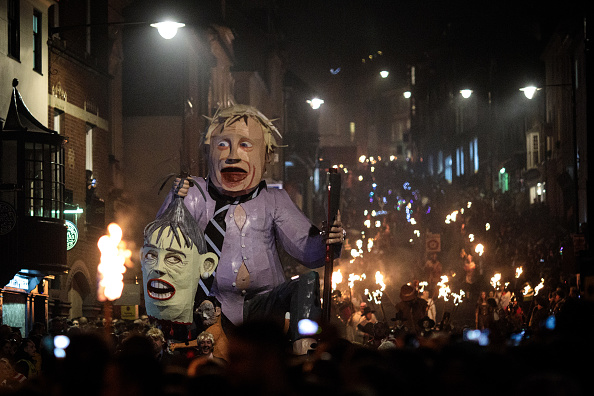 A phrase often used now is whether or not a possible deal will be in "the national interest". But what's the nation interested in? Is it interested in as many people employed as possible? Is it interested in a future where its children could move and work and study freely throughout 27 other European countries? Is it the strength and stability that has been so absent from British politics for the last two years?

Or are its interests elsewhere? Preservation of Britain for the British in a world where such attitudes are no longer plausible, let alone palatable? Blue passports — essentially a little badge that says "I'm not French or German"? Some do live in a world where such things matter more than jobs, and education, and free-flowing trade.

Layered over the old imperial bitterness that truly fuelled the Brexit vote was the myth that the EU had robbed Britain of her sovereignty. This was never true. Indeed, no country within the EU had more scope to play by its own rules. The fictive nature of this claim has been laid bare now as Brexiteers scramble around and claim that May's deal is worse than no deal — a state of limbo in which the UK would see the inflow of medical supplies, food and basic goods grind to a halt.

Brexit is the Wizard of Oz. The sad thing is just that so many of us have been able to see the man behind the curtain for so long — but nobody will do anything about it because they are just so desperate to believe. Those in power simply are not prepared to shake Brexit Britain from its delusion.

Just like Tinman's heart, Lion's courage and Scarecrow's brain, being controlled by Brussels was actually inside them all along.

Those behind Brexit are quickly running out of Yellow Brick Road, and it won't be long before they return to Kansas. Whether Toto has enough dog food to survive or starves to death because the supply lines into the UK are closed is another matter entirely.

popular
Netflix has just added an incredibly tense 97-minute thriller
Irish people could be treated to spectacular sights in the sky over the next few nights
Teenager airlifted to hospital after being seriously injured in Clare tractor crash
Prime Video has just added 25 very big movies to its library
Eamon Ryan's mother dies in tragic accident on family holiday
The Sweatiest Movie Quiz Of All Time
A great underseen action thriller is among the movies on TV tonight
You may also like
1 month ago
British PM candidate shares bizarre proposal to form alliance with "Viking parliaments", including Ireland
1 month ago
Coveney “hugely disappointed” by UK Government approach to NI Protocol
1 month ago
Coveney fires back at UK Government plans to change NI Protocol
3 months ago
Plan to suspend Northern Ireland Protocol reportedly "days away"
3 months ago
Mary Lou McDonald says UK Government "gamesmanship" over Northern Ireland Protocol won't be tolerated
3 months ago
Listeners praise Patrick Kielty following emotional interview discussing his father's murder
Next Page