Republicans booed her for her strong words.

In her first speech as a member of Congress, Cori Bush called for Donald Trump to be removed as President, referring to him as the "white supremacist in chief".

Bush, who was elected to Congress in November, said: "I rise in support of the Article of Impeachment against Donald J. Trump. If we fail to remove a white supremacist president, who incited a white supremacist insurrection, it’s communities like Missouri’s 1st District that suffer the most.

"We love you, you're very special" Trump tells his followers who have stormed Capitol Hill

END_OF_DOCUMENT_TOKEN_TO_BE_REPLACED

"The 117th Congress must understand that we have a mandate to legislate in defence of black lives. The first step in that process is to root out white supremacy, starting with impeaching the white supremacist in chief."

Republicans in the room responded by booing her, highlighting just how divided the US is at this moment.

What @CoriBush did today. Just watch some of the most important seconds in U.S. history. pic.twitter.com/mQab0UVGQO

What does it mean when they boo the Black congresswoman denouncing white supremacy?

Wednesday night saw Trump become the first US President to be impeached twice. 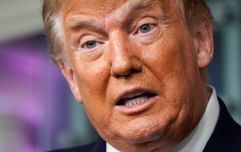 Donald Trump says him losing his lead is "VERY STRANGE"

END_OF_DOCUMENT_TOKEN_TO_BE_REPLACED

Trump has not yet made an official response to the impeachment, though he did release a statement at around the same time as the vote.

It read: "In light of reports of more demonstrations, I urge that there must be NO violence, NO lawbreaking and NO vandalism of any kind.

"That is not what I stand for and it is not what America stands for. I call on ALL Americans to help ease tensions and calm tempers."