Reports emerged on Thursday evening that Green Party leader Eamon Ryan suggested that a rural town of 300 people would only need 30 cars.

The Green Party has released a statement disputing reports that leader Eamon Ryan implied that rural towns of 300 in Ireland would only need 30 cars.

The statement says that what Ryan was actually suggesting was a car sharing scheme in certain communities, due to the fact that people have been "locked-out" of car ownership due to high insurance prices, while simultaneously "locked-in" to learning to drive as a result of lack of investment in public transport.

Addressing the reports that emerged on Thursday, the statement reads: "But the truth is – this headline is totally inaccurate.

"The Green Party does not stand for restricting car ownership, and to state otherwise is a huge misrepresentation of the party position and of Eamon’s comments.

"What Eamon Ryan proposed was that car sharing could provide people in rural Ireland with extra options. So cars AND car sharing. 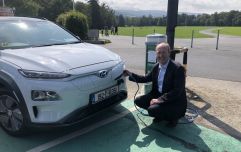 END_OF_DOCUMENT_TOKEN_TO_BE_REPLACED

It continues: "When it comes to climate change, people in rural Ireland are sometimes made to feel like they are part of the problem.

You can read the Green Party's statement in full here.


popular
Met Éireann says there's a risk of snow for parts of Ireland this weekend
QUIZ: Can you guess the pixellated movie posters?
Here are the 5 best movies on TV this evening
QUIZ: Can you name all these European countries just from their vowels?
Aldi to recruit 550 new staff and implement living wage rate for employees
Teenager arrested in relation to death of Cameron Blair at a house in Cork
Here are Ireland’s favourite takeaways, as per the National Takeaway Awards
You may also like
1 week ago
Trampolines and fallen trees affecting traffic all over Ireland due to Storm Brendan
2 weeks ago
Sale of new petrol and diesel cars set to be banned in Ireland after 2030
1 month ago
Irish car insurance premiums up 42% despite claims falling by 40% over last 10 years
1 month ago
Over 300 drivers arrested on suspicion of intoxicated driving in Ireland in the last two weeks
1 month ago
New system of penalty points and speeding fines to be considered by Cabinet
2 months ago
Motorists face €120 fine and three penalty points for dangerous overtaking of a cyclist
Next Page