He has not minced his words here.

News emerged on Monday night that the UK had suggested creating a string of customs posts along both sides of the Irish border as part of its effort to replace the backstop.

END_OF_DOCUMENT_TOKEN_TO_BE_REPLACED

Boyle described the plans as "shocking and outrageous", saying:

"That clearly would be a hard border. It is a complete reversal on the commitment from the previous British government, made last December.

"It's hard to see how that could possibly be acceptable in any universe, to any government within the EU.

"And frankly, I think that Ireland's friends on Capitol Hill would also be outraged by it."

Boyle is a Democratic member of the United States House of Representatives, representing Pennsylvania's 2nd congressional district serving in Congress since 2019.

Prime Minister Boris Johnson has since denied these proposals, stating:

"That's not what we're proposing at all." 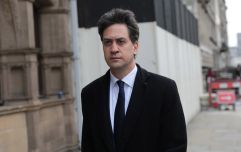 END_OF_DOCUMENT_TOKEN_TO_BE_REPLACED

Sinn Féin leader Mary Lou McDonald also criticised the potential move, saying that Boris Johnson should "give himself a shake".

McDonald also described the proposals that were leaked as the worst kind of "political vandalism" in a brief interview.

You can listen to Tuesday's episode of Morning Ireland in full here.

House of Rugby Ireland · Quinn Roux on finding a home in Ireland and Mike McCarthy brings the absolute HEAT!
popular
20 of the best comedies to watch on Netflix right now
The JOE Friday Pub Quiz: Week 227
Yewande Biala releases statement discussing racism on Love Island
Bernie Sanders is using his inauguration meme to raise money for charity
Gardaí warn of scam targeting AIB customers
QUIZ: The JOE Music Quiz: Week 41
The 50 most iconic songs of all time* have been revealed
You may also like
1 week ago
Items posted from Ireland for delivery worldwide in December still in transit, says An Post
2 weeks ago
DPD pauses deliveries from UK to Ireland due to Brexit
2 weeks ago
Leave.EU moves its registered domain address to Waterford so it can keep its website
3 weeks ago
Boris Johnson's dad has applied for French citizenship
4 weeks ago
UK and EU finally agree post-Brexit trade deal
1 month ago
Brexit-backing billionaire moves new vehicle production to France
Next Page