Joe Biden tells audience: "I may be Irish but I'm not stupid"

We've been called worse, but still.

Heading into the new year, former Vice President Joe Biden remains at the front of the pack of Democrats hoping to unseat Donald Trump in November's presidential election.

However, Biden is well-known for making off-the-cuff comments that cause controversy, and it seems that his Irish heritage is at the heart of the latest "gaffe." 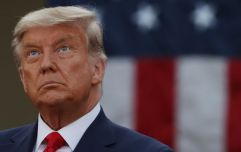 END_OF_DOCUMENT_TOKEN_TO_BE_REPLACED

According to John Mulholland, Editor of The Guardian US, Biden told a crowd in Iowa that: "I may be Irish, but I'm not stupid." Mulholland, who is originally from Dublin, also noted: "Wonder what Irish people (like me) would make of that."

Mulholland's tweet has gathered a lot of steam, with well over 1,000 likes on Twitter, but it remains to be seen whether the remark impacts Biden's support.

It's actually not the first time that Biden has used this line. In 2015, Biden was recorded using the very same phrase while speaking to Senator Lindsey Graham.

Joe Biden at a forum for Democratic candidates in Iowa "I may be Irish, but I'm not stupid." Wonder what Irish people (like me) would make of that. #Teamsters2020

Biden's old-school speaking style has become a talking point on the campaign trail, not least since he unveiled his new slogan "No Malarkey!"

Biden, who is now 77 years old, can trace his lineage back to Louth and Derry on his mother's side. His mother was born Catherine Finnegan.

House of Rugby Ireland · Munster's nail-biting win, European games in doubt and Darren Cave interview
popular
The JOE Friday Pub Quiz: Week 226
Recall of Pedigree dog food over safety concerns
QUIZ: Can you correctly identify these European country flags?
QUIZ: Can you pass your driving test and guess the meaning of all these road signs?
QUIZ: Name all the counties of Ireland that contain 3 vowels or more
QUIZ: Can you guess the drink from its can?
QUIZ: Can you name the Marvel Cinematic Universe film from just a single screen shot?
You may also like
1 week ago
Trump agrees to orderly transition of power, says fight to make America great again is only beginning
1 week ago
Two photos of Capitol building 1,448 days apart encapsulate horror of Trump presidency
1 week ago
US Capitol: Four dead, 52 arrests, 15 days of national emergency declared
1 month ago
US Electoral College officially confirms Joe Biden's victory over Donald Trump
1 month ago
Joe Biden and Kamala Harris named TIME magazine's 'person of the year'
1 month ago
YouTube to remove presidential election conspiracy theory videos
Next Page