Micheál Martin didn't hold back in his criticism for Taoiseach Leo Varadkar during his appearance on Friday evening's Late Late Show.

Martin contended that his Fine Gael rival lacks humility and is "obsessed" with his relationship with the media.

END_OF_DOCUMENT_TOKEN_TO_BE_REPLACED

"I think he's very obsessed in terms of the media presentation. Everything is through the lens of how it's perceived," Martin added.

He recalled a meeting between the pair in Killarney during the summer in which they discussed plans to work together in respect of the confidence-and-supply arrangement throughout the remainder of the year and would meet again to iron things out.

"The following day, there was a big front page headline - 'Leo tells Micheál he wants two more years' - now, I don't do business that way and I think that he could do with a degree more humility, maybe."

Tubridy then asked if Martin felt let down by the situation.

"I just thought it was a bit immature in terms of the approach and I think that it was wrong, because you have to build up trust with people.

"He must respect the fact that we have facilitated the formation and continuation of a government, and then I get a long letter on the 30th of August and I'm told I must update the cabinet. I read that straight away as code for 'I'm issuing a press release' but that's not communication, that's not building up a relationship with people." 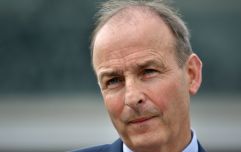 END_OF_DOCUMENT_TOKEN_TO_BE_REPLACED

Asked if he felt that the Taoiseach was immature in other ways, Martin was neutral, noting that he and Varadkar get on "personally well" and are civil with one another.

"Look, I'm not into personalities," he said.

"I'm into the policy of playing the ball, not the man. That's not my style. What I call immature was the behaviour in Killarney. I've been in negotiations in the North, I've negotiated with Unionists - you have to earn the confidence of people because people are coming at it from different perspectives."

The Big Reviewski || JOE · TBR Spotlight: Loki - Episode Six - 'For All Time. Always.'
popular
QUIZ: Ignite your brain cells with this testing general knowledge quiz
The JOE Movie Quiz: Week 112
Arlene Foster joins GB News as contributor on Nigel Farage's Political Correction show
Sunshine and high temperatures to come to an end as Met Éireann predicts week of thunder and rain
The JOE Friday Pub Quiz: Week 253
The JOE Music Quiz: Week 67
The 50 most iconic songs of all time* have been revealed
You may also like
3 days ago
Phased return to workplaces expected to happen in September, says Leo Varadkar
3 days ago
Leo Varadkar says Ireland is "without a doubt" well into a "fourth wave" of Covid-19 pandemic
4 days ago
Taoiseach and Tánaiste pay tribute to "giant" of Irish politics Des O'Malley
1 week ago
Leo Varadkar rules out Irish nightclubs reopening for "quite some time"
1 week ago
Leo Varadkar confirms exception will apply to unvaccinated hospitality staff as Cabinet sign off on indoor dining legislation
2 weeks ago
Leo Varadkar says antigen tests may be an alternative to Covid pass when pubs reopen
Next Page