Twitter has also claimed that its users can tackle hate speech on the social network by publicly stating that they disagree with it.

The social network told Irish politicians that “counterspeech” created solidarity for people suffering online abuse, while also claiming that not banning abusive trolls gave Twitter a chance to “educate” them.

The internet giant appeared alongside Facebook and Google at an Oireachtas justice committee examining online abuse on Wednesday.

END_OF_DOCUMENT_TOKEN_TO_BE_REPLACED

The committee meeting comes after it emerged that a young mixed-race family have decided to leave Ireland after suffering racial abuse and death threats online.

Fiona Ryan, 33 and her fiancée Jonathan Mathias, 32, had appeared in an advertising campaign for Lidl alongside their 22-month-old son. After the television and billboard advertising appeared, racist accounts started harassing the couple on Twitter. The couple have now decided to leave their home in Meath following a death threat.

Asked about the abuse the Ryan family suffered, representatives from Twitter told TDs and senators on Tuesday that they had deleted one tweet which was aimed at the family.

Karen White, a director of policy at Twitter’s European headquarters in Dublin, said that she would sympathise with anyone who has experienced targeted abuse or harassment.

White said that Twitter had moved away from a “binary system” of banning abusive users where “you break the rules, your account is suspended.”

She claimed that instead, Twitter was now using a range of measures including asking users to delete individual abusive tweets because it believed it could “educate” them.

“The objective there from these enforcement actions is really to try to educate people to bring them back into compliance,” she said.

END_OF_DOCUMENT_TOKEN_TO_BE_REPLACED

Jack Chambers, the Fianna Fáil TD, asked White if deleting one tweet was a “weak” response.

She said: “Progress in this area in relation to the type of behaviour that you’re talking about is incredibly tough and I think there is a wider societal issue that needs to be addressed here.”

Ronan Costello, a public policy manager at Twitter, claimed that abuse could also be tackled through “counterspeech”; when other Twitter users challenge or disagree with hate speech.

“Not referencing any particular case but when someone tweets something that the majority of Twitter users - be it in Ireland or other countries - find distasteful or offensive, we often see - or our users see - that the number of tweets that reject the premise of that tweet, reject its content and thereby create a majority around that far outnumbers the number of people who agree with the original tweet,” Costello said.

He added: “I would say that people who may disagree with an original tweet that they may find distasteful or offensive are creating a consensus of solidarity around the opposing point of view.” 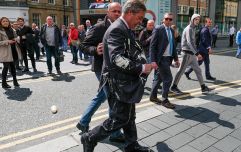 END_OF_DOCUMENT_TOKEN_TO_BE_REPLACED

The same committee meeting also heard that Facebook’s artificial intelligence failed to spot the Christchurch terrorist’s livestream of his attack for what it was, because it was a video from the first person. Dualta Ó Broin, Head of Public Policy for Facebook Ireland, said that the social network is working with police to fix this problem.

Caoimhghín Ó Caoláin, the chair of the committee, challenged Facebook about a page on its social network which had included offensive commentary about senior staff at Quinn Industrial Holdings. An offensive post, which had compared management at QIH the the “notorious Shankhill Butchers”, was not removed by Facebook until after Kevin Lunney, the chief operating officer at QIH, was violently attacked.

Mr Ó Broin said that the post wasn’t initially found to be in violation of its community standards, but was “re-reviewed” and removed after Mr Lunney was attacked.

"Having looked back at the post, what we should have done is take the wider context into account when the post was initially reviewed. That didn't happen,” he said.

Representatives from Twitter, Facebook and Google all refused to be drawn on whether or not their platforms should be subject to stricter regulations, and said it was a matter for legislators.

The Big Reviewski || JOE · The Big Reviewski with Dune, a mini-Hangover reunion & the best of Timothée Chalamet
popular
PICS: The man with the biggest penis in the world has one unbelievable problem with it
Report: Crew left Alec Baldwin film set in protest before fatal shooting
9 of the best horror movies on Netflix right now
The 50 most iconic songs of all time* have been revealed
The JOE Friday Pub Quiz: Week 266
The JOE Music Quiz: Week 78
QUIZ: Can you name all the countries beginning with L?
You may also like
1 day ago
Priest blesses local nightclub in the most Donegal thing imaginable
1 month ago
Garth Brooks might be returning to Ireland, and people have a lot to say about it
2 months ago
People have been sharing their “fashion” experiences in Ireland and it’s incredible
2 months ago
The man behind the wildly viral 'Free Luas' campaign says he just "thought it was funny"
2 months ago
Luas reaffirms customers "found travelling without a ticket" will be fined amid 'Free Luas' Twitter campaign
3 months ago
10 of the best memes as Love Island return sends fans into a frenzy on Twitter
Next Page