QUIZ: Which of these cities has a bigger population than Ireland? (Part Two)

Some huge cities on this list, but is the population bigger than ours?

Just like the first instalment of our 'cities with a bigger population than Ireland quiz', this one follows the same parameters.

If you haven't already done that quiz, you should know that, as of the last Census in 2016, the population of the Republic of Ireland is a little under 4.8 million (4,757,976 to be precise). Recent estimates suggest it's closer to 4.9 million. 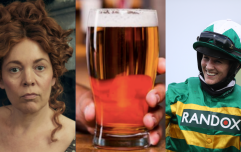 END_OF_DOCUMENT_TOKEN_TO_BE_REPLACED

You should also know we have had to select cities that have a far greater population than 4.9 million (according to worldometers.info) in order to avoid meltdowns and finger pointing.

We've given you 15 options and eight of the cities below have populations bigger than the Republic of Ireland.

How many can you get right?

popular
The JOE Friday Pub Quiz: Week 239
The 50 most iconic songs of all time* have been revealed
Amazon is spending $650 million just on the first season of their The Lord of the Rings show
People think they've figured out the ranking of the viewers on your Instagram Stories
PICS: The man with the biggest penis in the world has one unbelievable problem with it
Forbes commit to hosting major event in Limerick after controversial article
Stephen Donnelly says he "couldn't care less" about being mentioned by his department on Twitter
You may also like
2 days ago
QUIZ: Can you name the counties in Ireland in order of size, from the largest to the smallest?
6 days ago
The JOE Music Quiz: Week 52
6 days ago
QUIZ: Can you identify the cities of California from this list?
1 week ago
The JOE Friday Pub Quiz: Week 238
1 week ago
QUIZ: You'll find it hard to name all these towns from their Irish name
1 week ago
JOE’s Song Of The Day #890 – Lemonade Shoelace 'Autopilot Paradise'
Next Page