26 years of Fergie: His 13 best and worst Man United signings

To mark Alex Ferguson’s 26 years at Old Trafford, we have compiled a list of his 13 best and 13 worst signings for Manchester United. There were plenty of contenders for both sides.

END_OF_DOCUMENT_TOKEN_TO_BE_REPLACED

‘The King’ almost singlehandedly guided United to their first League title in 26 years in 1993, having been snapped up by Fergie from Leeds for a measly £1.2 million after the United boss chanced his arm during a phone conversation between the chairmen of both clubs.

Hugely influential during United’s period of dominance during the 90s, Cantona was a cult hero on the terraces until his premature departure in 1997 and is still revered at Old Trafford to this very day.

A £650k capture from Oldham in 1990, Irwin went on to become the most dependable full-back in the league, was comfortable on the left or right side and couldn’t half hit a free-kick either.

END_OF_DOCUMENT_TOKEN_TO_BE_REPLACED

His pockets were full of medals when he eventually left Old Trafford in 2002, including seven Premier League titles, three FA Cups, A Cup Winners Cup and a Champions League winning medal from 1999.

Signed from Molde for a paltry £1.5 million in 1996, the Baby Faced Assassin will go down as one of the most effective super-subs to play the game but that wouldn’t be doing him justice.

Along with Robbie Fowler, Solksjaer was probably the best finisher of his era and will forever be remembered for his match-winning contribution in the 1999 Champions League Final.

END_OF_DOCUMENT_TOKEN_TO_BE_REPLACED

He didn’t come cheap, but Rooney has more than justified the huge £27 million outlay since arriving as a raw teenager in 2004. He set the bar incredibly high by scoring a hat-trick on his debut, but despite a few blips and runs of bad form in between, he has lived up to expectations and remains United’s most important player today.

Eyebrows were raised when Fergie splashed out £12.25 million for the unknown Portuguese teenager in 2003, but when he was sold on for a £67 million profit six years later few doubted that CR7 represented huge value for money during his time in the north-west.

Took time to find his feet at Old Trafford, but by the time he left he had become the unstoppable goal-scoring machine we see in Real Madrid colours today. His name is still sung by the United supporters almost without fail every weekend.

The Great Dane was instrumental in United's domination of the 1990s. A hugely commanding keeper, he was a game winner on many an occasion. This save in the Champions League against Rapid Vienna is one of the best saves you will ever see.

Hard to imagine better value for money than the £500,000 Fergie paid Brondby for his services in 1991. A social chameleon, Schmeichel now sports an impressive Mancunian accent.

Eyebrows were raised when Fergie broke the British transfer record to buy the Cork man in 1993, but what a shrewd investment it proved. An inspirational captain that brought the best out in those around him. 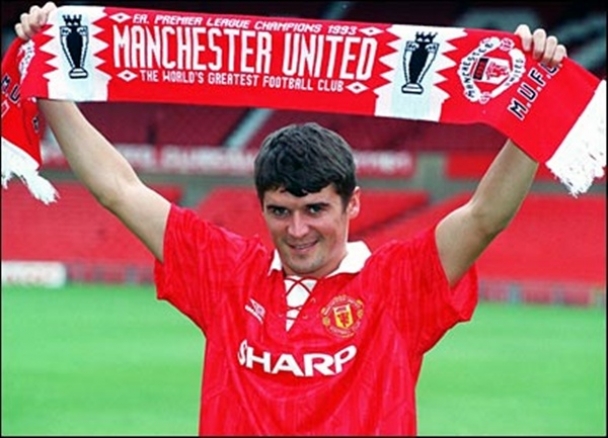 Left under a cloud to join Celtic in 2005 and the relationship with his manager was over, but Fergie still regards him as the finest captain he ever had. Not so much loved by MUTV, the prawn cocktail brigade or Alan Shearer.

Fergie signed him as a 35-year-old but he was a rock during his six-year stay at Old Trafford. The first goalkeeper since Schmeichel that achieved any consistency, he was instrumental in the Champions League success in 2008.

The oldest player to ever win the Premier League, he created a world record during the 2008/09 season by not conceding a goal for 1,311 minutes of action.

He cost £19 million and like Roy Keane, he left on bad terms when Louis Saha ousted him from the starting XI, but 95 goals in 150 games tells you everything you need to know. His partnership with Rooney was more than just Shrek and Donkey, it was devastating against Premier League and European defences alike.

Only one Premier League and FA Cup medal was a poor return for a player that had such an impact in his five years at the club.

The central defender will be held dearly in Man United fans’ hearts for years and at £800,000 from Norwich, he was a steal.

Man United’s first captain after Bryan Robson, Roy Keane spoke of him as one the true leaders of Fergie’s first great Man United side.

The first Englishman of the twentieth century to captain a side to the Double (1993/94 season), his two late goals against Sheffield Wednesday the previous year secured Man United’s first league title since 1967. Legend.

Alex Ferguson bought back Sparky from Barcelona after the Welshman had spent a few seasons in Spain and in his first season back he won Player of the Year.

Over the next few years Hughes, nearly as much as Cantona, had a penchant for scoring spectacular and vitally important goals.

A cult hero at United and though he cost £1.8million, a British record at the time, that outlay looks like a steal now.

The Serbian cost £7 million when he was bought in 2005; his long time partner Rio Ferdinand cost £30 million.

Many would contend that the aggressive, intelligent Vidi? has been more vital to United’s success in recent years than Rio. Despite a shaky first six months at United his importance is always apparent when he’s missing, like at the moment.

At the heart of United’s defence for four Premier League titles and one Champions League. £7 million? Not bad...

Evra arrived for £5 million from Monaco in 2006 and since then he has been a France and United captain. He can attack and defend with an astonishing stamina and work rate. If you were to design the ideal modern full-back from scratch he would end up looking like the Frenchman.

After Denis Irwin’s departure from Man United, Silvestre and Heinze fought it out for the left-back slot. Evra put an end to that discussion and although he looked particularly shaky last year, he’s been back to his somewhere approaching his best and even among the goals in recent weeks.

Bellion arrived from Sunderland in 2003 during one of Fergie’s worst periods in the transfer market and although he could run very, very fast, that was about all he could do. Shipped off to Nice in 2006 after three seasons at the club.

A controversial one perhaps, because he did have his good days at United after his arrival in 2001, but despite his talent he never lived up to the whopping £28 million price tag and Fergie was happy to take a £13 million hit when giving him to Chelsea after two frustrating seasons at Old Trafford.

Fergie said he was the one player he had never seen play before his arrival and you can be damn sure he’ll never make that mistake again after this episode.

Former club Vitória de Guimaraes couldn’t believe their luck when United splashed out £7.5 million on a player whose career highlight before joining the Red Devils was his performance at the European Street Football Festival in 2009.

Still on the books at United but surely not for much longer.

Another controversial choice because he’s still adored by the United faithful, but as good as he is now and although he eventually made a decent impression at the club, he was toilet during his early spell at the club when he couldn’t buy a goal for love nor money.

Roy Keane wouldn’t let him take a penalty in one game and he couldn’t get his shirt back on after scoring a goal in another, but he once scored twice at Anfield and United fans will never forget that.

He was bought for £3.5 million after scoring one of the all-time famous goals for the Czech Republic at Euro ’96, but Poborsky never cut in the Premier League and was sold to Benfica for a cut-price fee a season and a half later. Still had a decent career afterwards, mind. 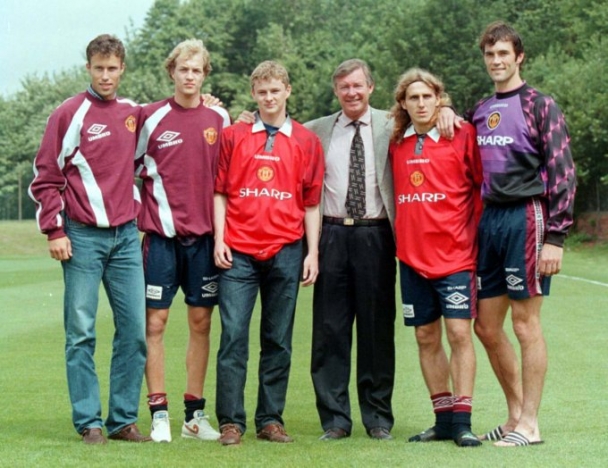 Bit of a mixed bag, this lot. Still, what a picture!

The current Colomier manager played just twice for United. His debut against QPR in December 1995 was okay, his performance against Spurs where they lost 4-1 was not. Fergie offered to extend his trial, but the man voted the sixth worst player of all time declined and went home to France.

The man who tried to make jogging pants fashionable was a costly £4.5 million mistake. Four games played, twelve goals conceded, he is now the benchmark of poor goalkeepers. Was voted as man-of-the-match in his first game at Anfield, but soon returned to Serie A after a now infamous howler against Southampton at Old Trafford.

Holds the unusual honour of being one of only two goalkeepers ever to score in an Italian league match.

Suffice to say, not a patch on his old fella. Cruyff spent a rather underwhelming four years at Old Trafford, though he did join a select band of players to have played for both Barcelona and United. Now a Sports Director at Maccabi Tel Aviv.

So good they named him twice, went the chant. Not quite. After thirty horribly average-at-best games for United, David O’Leary managed to convince Doug Ellis to part with £1.5 million for the Cameroon international. Deadly Doug must still have nightmares about that.

He moved to United for roughly £3million, so it’s not a major outlay in terms of cost, unless you can put a monetary value on Man United fans’ frustration and if you could, it would be dear. Obertan was versatile, tall, athletic and looked good on paper.

Unfortunately, it looks like Fergie’s scouts messed him about this time because although he fulfilled all the criteria that Fergie was looking for – except actually being good at football – he moved on to Newcastle after two seasons and 14 appearances. He has found his level there... on the bench.

When Miller moved to Man United from Celtic there was a lot of talk about the young Irishman and Alex Ferguson compared him to United legend Brian McClair in terms of intelligence and passing. Since then, his career has free fallen more spectacularly than Felix Baumgartner. He now plies his trade at Perth Glory in Australia. A pity...

Set up two goals in the 2002 World Cup final and then became the first Brazilian to join United, for £6.5 million. The defensive midfielder’s failure was nearly as great as his billing. Fergie wanted to use him as a replacement for the departing Veron and in a sense he was – another massive midfield disappointment.

Another disappointing goalkeeping signing by Ferguson, who made 49 appearances for the Red Devils and then left after being told he wasn’t nailed on to be first choice in May 2005. Could never be trusted with the number one jersey after some bad fumbles, including the infamous one against Spurs at Old Trafford. Yes, this one.