There's going to be some craic in Sin City.

Conor McGregor and Jose Aldo's fight takes place on December 12 in Las Vegas and we're expecting thousands of Irish fans to travel over for it.

We did a story earlier month about two Irish guys who are organising a 12 Pub of Christmas in Vegas ahead of the fight and it's escalated to something huge.

When we did the story, around 60 people said they were going on the Facebook event page, now the crowd is a bit bigger.. 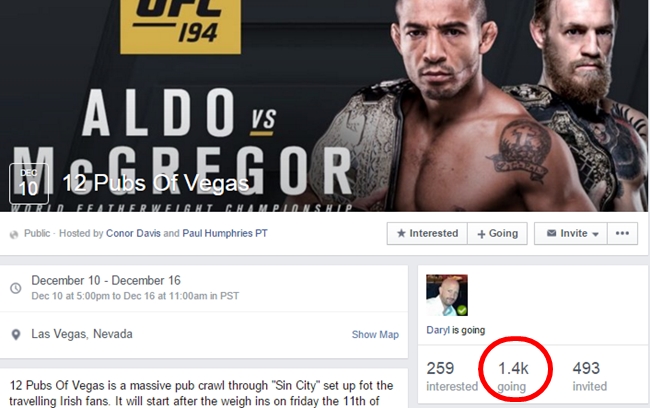 END_OF_DOCUMENT_TOKEN_TO_BE_REPLACED

Yes, over 1,400 people are now "going" on the 12 Pubs. We know a percentage of those people will drop out, but it's still going to be a hell of a party on December 10.

END_OF_DOCUMENT_TOKEN_TO_BE_REPLACED

The organisers of the page have decided to raise some money for charity in the build-up to the night and during it. Sound.

They've already raised €250 for the Simon Community and hope to reach €500 by the time they're finished. Donate here.

popular
Harvard study reveals how many times men should ejaculate each month to stay healthy
Colin Farrell shouldn't win the Oscar this year
Conor Mcgregor hit by car ‘at full speed’ while cycling
Parents left in shock after gorillas start mating in front of kids at zoo
Forspoken breaks the golden rule of gaming... and not in a good way
Netflix has just added one of the best sci-fi movies of recent years
New sci-fi horror set to be this year's A Quiet Place
You may also like
2 months ago
Conor McGregor slammed for Halloween photo of mum in 'black face'
5 months ago
Conor McGregor to make film acting debut in Road House remake
2 years ago
Conor McGregor responds to Paschal Donohoe’s calls to encourage social distancing amongst Irish public
3 years ago
"I was in the wrong" - Conor McGregor apologises over incident in Dublin pub
3 years ago
Charges dropped in Conor McGregor phone-smashing case
3 years ago
WATCH: New footage released of Conor McGregor allegedly smashing fan's phone in Miami
Next Page