Conor McGregor reveals he's targeting ventures outside of the UFC

He's got his power back after his win against Diaz...

The rematch between Conor McGregor and Nate Diaz was a sticky situation for the Dubliner, if he'd lost, his star power may have taken a bit of a battering and the hype train may very well have been derailed.

He doubled down and rolled a pair of sixes emerging the victor in a fight which has enhanced his reputation as a fighter in the eyes of many people around the world.

END_OF_DOCUMENT_TOKEN_TO_BE_REPLACED

But what's next for The Notorious? If Dana White is to believed, he must defend his featherweight crown against Jose Aldo or be forced to relinquish it, but it wouldn't be like the UFC President to make a statement then have a sudden 180 when the winds change. 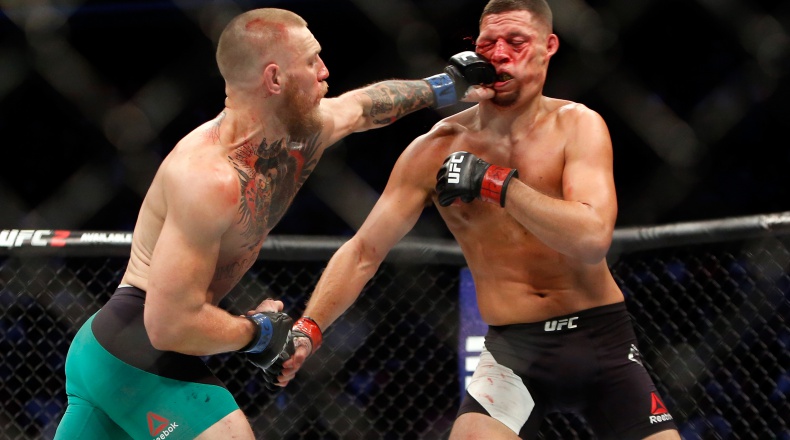 Speaking on White's comments, McGregor said: "I don't think they'll do that. How can they do that? If they want to give my belt to the guy I KO'd in 13 seconds and bury that division in the prelims or the Fight Pass stuff cause that's what they're going to do."

From his comments at the post fight press conference, it's clear that a return to featherweight isn't very appealing to McGregor, he talked down a possible rematch with Aldo and revealed he's other options outside the UFC.

"There's a lot of options. Some might not be this sport. I'm in a beautiful, beautiful position right now," McGregor said. "And that was built through hard work and I'm going to capitalize on that."

END_OF_DOCUMENT_TOKEN_TO_BE_REPLACED

His instant classic with Nate Diaz has returned some of his bargaining power and there's the little matter of a trilogy fight with Diaz to consider, although that looks more likely to be at least a year away.

It could be a move into films, emulating Ronda Rousey, or maybe, just maybe, his WWE trash talk has been building up to something big...

The Big Reviewski || JOE · TBR Spotlight: Loki Episode One - 'Glorious Purpose'
popular
The JOE Friday Pub Quiz: Week 247
Matt LeBlanc has seen the memes of him as every Irish auld lad and very much enjoyed them
QUIZ: Take on this tasty challenge of your General Knowledge skills
A Dublin Cafe will pay you €50 if you can finish this MONSTER breakfast roll
The JOE Movie Quiz: Week 106
QUIZ: Full marks are far from certain in this general knowledge quiz
5 new Netflix additions to get you through the weekend
You may also like
1 year ago
Conor McGregor responds to Paschal Donohoe’s calls to encourage social distancing amongst Irish public
1 year ago
"I was in the wrong" - Conor McGregor apologises over incident in Dublin pub
2 years ago
Charges dropped in Conor McGregor phone-smashing case
2 years ago
WATCH: New footage released of Conor McGregor allegedly smashing fan's phone in Miami
2 years ago
Leo Varadkar and Conor McGregor lead the way in Chicago St. Patrick's Day parade
2 years ago
Conor McGregor and Nate Diaz have once again teased a third fight between the two
Next Page