WATCH: Footage has emerged of footballer Douglas Costa spitting in another player's mouth

The Portugese striker scored two goals in a 2-1 win over Sassuolo to put the Italian giants back at the top of the Serie A. 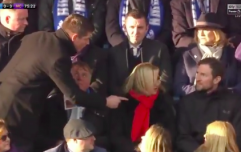 END_OF_DOCUMENT_TOKEN_TO_BE_REPLACED

The second goal, in particular, was a lovely one, and it will terrify teams around Europe that the so-called drought ended just as the Champions League returns.

Sassuolo pulled a goal back in the last few minutes.

But Ronaldo won't steal all the headlines from this particular game.

His team-mate Douglas Costa was sent off for spitting in another player's mouth.

The Brazilian winger was seen intentionally spitting in the direction of Federico Di Francesco's face.

This is going to be a huge story in world football. Douglas Costa spits in Federico Di Francesco's mouth during the #Juve and #Sassuolo game. pic.twitter.com/IXyYDClct8

The incident went to VAR (remember VAR?), and Costa was correctly sent for an early shower for this nasty act. 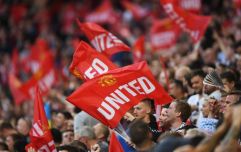 END_OF_DOCUMENT_TOKEN_TO_BE_REPLACED

He will definitely face a lengthy ban for this incident.

Luckily they've another fella to play in his position who's not too bad...

Costa has since taken to Instagram to apologise for the regrettable episode, saying:

"I want to apologise to all the Juventus fans for this over the top reaction I had during today’s game.

“I also apologise to my teammates, who are always by my side, in good and bad times. It was ugly, I am aware of that and I apologise to everyone for that.

“I want to make clear that this isolated conduct has nothing to do with what I’ve shown throughout my career.”

popular
Harvard study reveals how many times men should ejaculate each month to stay healthy
Woman who died after being mauled to death by eight dogs has been named
Richard Madeley apologises after calling Sam Smith 'he' and bungling guest's pronouns
Prime Video has just added one of the best dramas of the last decade
Omniplex Cinemas are hiring for an awesome and very rare job
Parents left in shock after gorillas start mating in front of kids at zoo
James May condemns Jeremy Clarkson for 'creepy' Meghan Markle column
You may also like
3 years ago
Lansdowne Road DART station will close for Ireland vs Denmark as Euro 2020 preparation
3 years ago
Win an awesome Premier League trip for you and a mate
3 years ago
Don’t miss this five-a-side competition in Dublin
4 years ago
Ireland's Euro 2020 group has been announced
4 years ago
Referee hospitalised following serious assault during midlands game
4 years ago
WATCH: Young fan absolutely takes the piss during ceremonial kick-off, and it's glorious
Next Page