It's not often that events on a football field will draw commentary from Ireland's Taoiseach Enda Kenny, but Seamus Coleman's horrific leg-break last night against Wales is a rare exception.

Neil Taylor's reckless challenge on the Ireland captain sent the entire country into distress, and Enda Kenny took time out of the EU summit on Saturday to slam the actions of the Welsh full-back.

“I thought it was a horrific tackle, a compound fracture, of the Irish captain. It’s a very, very bad blow for Séamus Coleman.” 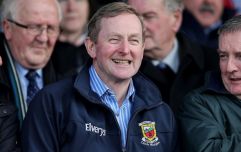 END_OF_DOCUMENT_TOKEN_TO_BE_REPLACED

Mr. Kenny joined Ireland fans across the country in hoping that Seamie's doctors are able to do as good a job as possible when it comes to healing the man the Killybegs.

“I hope the surgeons can mend that in a way that he can continue to play again, which is obviously a great challenge for him.

“It’s not usual to find that level of ferocity in tackles in the beautiful game these days, so good luck to Séamus in his recovery.”

The Big Reviewski || JOE · The Big Reviewski with Y: The Last Man, that Malignant ending & a secret streaming service
popular
The 50 most iconic songs of all time* have been revealed
PICS: The man with the biggest penis in the world has one unbelievable problem with it
You could be shopping in an Aldi store with no checkouts in Ireland in the near future
"One person's rent is another person's income" – Varadkar rejects calls for three-year rent freeze
Almost 25 years on, one of the stars of Face/Off tells a personal Nic Cage story
Government announces special €1,860 payment for laid-off workers during pandemic
People think they've figured out the ranking of the viewers on your Instagram Stories
You may also like
5 months ago
Here's the lineup for this week's episode of The Late Late Show
10 months ago
Shane Ross apologises for describing Enda Kenny as “a political corpse”
1 year ago
Enda Kenny has missed 96% of Dáil votes since stepping down as Taoiseach
2 years ago
Enda Kenny and Bear Grylls join forces for victory at inaugural yachting regatta
3 years ago
PIC: Enda Kenny is now rocking a scruffy beard and it's quite something
3 years ago
Enda Kenny to retire from Dáil at the next election
Next Page