Right now, 'if' is the important word for the Republic of Ireland as the final draw for the group stages of Euro 2020 was made in Bucharest.

END_OF_DOCUMENT_TOKEN_TO_BE_REPLACED

If the Republic of Ireland can beat Slovakia in March and then beat the winner of Bosnia-Herzegovina vs Northern Ireland in the play-off final - another away fixture for Mick McCarthy's men - then a fourth appearance in the European Championships is a certainty.

However, it's worth noting that it has been three years since the Republic of Ireland have won back-to-back away games. That last time before that was 2012.

Hope springs eternal that Ireland will be able to qualify for three European Championships in a row.

After finishing third in their qualification group behind Switzerland and Denmark, the familiar play-off route is Ireland's fate and should they beat Slovakia and the winner of Bosnia-Herzegovina vs Northern Ireland, the boys in green will be taking on Spain, Poland, and Sweden at the Euros.

END_OF_DOCUMENT_TOKEN_TO_BE_REPLACED

All matches in Group E will be played in Dublin and Bilbao.

Elsewhere, there's the enticing prospect of Group F with Portugal, France, Germany all taking on each other. Now that's a group of death!

Elsewhere, England vs Croatia, Wales vs Italy, and Belgium vs Russia are bound to be crackers.

Of course, in terms of host nations, the structure of Euro 2020 is vastly different to previous iterations of the tournament. The tournament is scheduled to be held in 12 cities in 12 UEFA countries from 12 June to 12 July 2020. Dublin is one of those cities with matches scheduled to take place at the Aviva on 15, 19, and 24 June. 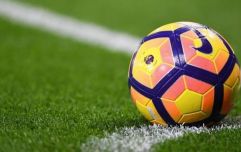 END_OF_DOCUMENT_TOKEN_TO_BE_REPLACED

The Aviva will also host a round of 16 knockout match on 30 June.

Portugal are the defending champions, having won the 2016 tournament in France.

popular
Met Éireann updates weather warning for entire country as temperatures set to fall to -6
Céline Dion diagnosed with incurable neurological disease
The "eighth best movie ever made" is among the movies on TV tonight
Jennifer Lawrence sparks controversy by saying she was the first woman to lead an action movie
5 deadly destinations for a last-minute city break this winter
Shane MacGowan's wife shares update after singer is hospitalised
The start of the superhero takeover of Hollywood is among the movies on TV tonight
You may also like
2 weeks ago
Dublin nightclub suspends security guard following racism allegations
3 weeks ago
QUIZ: How well do you know the towns and villages of Dublin?
1 month ago
6 deadly whiskey distilleries and experiences to try out in Dublin
1 month ago
Man in serious condition following assault near Connolly Station in Dublin
1 month ago
Gardaí investigating "all the circumstances" following discovery of woman's body near Luas tracks
1 month ago
Two girls seriously injured in crash involving car and pedestrians on busy Dublin street
Next Page